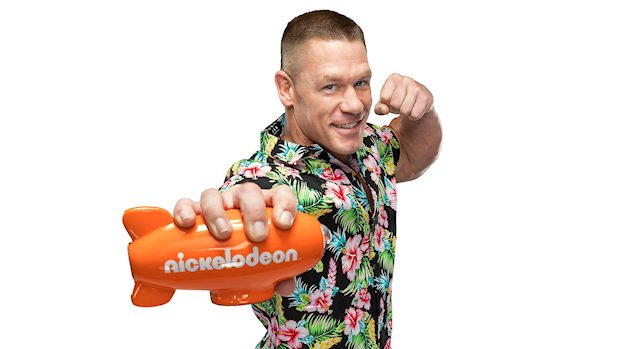 For the second consecutive year, John Cena hosted the Nickelodeon Kids’ Choice Awards and got drenched with the show’s signature slime. Check out Cena getting slimed in the video below.

To kick off the show, the 16-time World Champion smashed through walls, which led to him encountering The Bella Twins. He stepped into the ring with Nikki and Brie, as seen in the clip below.

Cena also appeared on the orange carpet dressed up as Leonardo of the Teenage Mutant Ninja Turtles.

COWABUNGA! 🐢 Our turtle-y awesome host @johncena made his grand appearance on the #KCA #OrangeCarpet! 🧡 pic.twitter.com/2DU2UqY4yM

Here are more Cena highlights from the event.

What did @JohnCena learn tonight at the #KCA?! @Nickelodeon #SLIME pic.twitter.com/VMzh1JNYN5

Today is about celebrating young men and women around the world, their ability to use the voice and affect change for the future. The #KCA2018 is about having fun and reminding kids how important they are.

Making final preparations before #KCA. Tonight is going to be AWESOME! @Nickelodeon pic.twitter.com/kBAVpbECsD

Rehearsals before #KCA2018 have been super fun, but meeting these young folks is always the best part of my day. Thank you to @Nickelodeon for helping make it possible. pic.twitter.com/6iIZyyXoqC

How is that blimp floating? #kca pic.twitter.com/NQkElGNcpW

Have you ever seen so many blimps?! See these AND MORE tomorrow on @Nickelodeon Kids Choice Awards! #KCA2018 pic.twitter.com/X3DPdgk5Gx

In the clip below, Cena says hosting the Nickelodeon Kids’ Choice Awards was a blast and that he will be at Sunday’s WWE live event in Buffalo, New York (after flying from Los Angeles, California).

The @Nickelodeon #KCA was a blast. Thank you so much to everyone for letting me have fun. Now it’s time to change out #slime for some shorts because tomorrow it’s time for @WWE Live! pic.twitter.com/T8w9f7bhDo