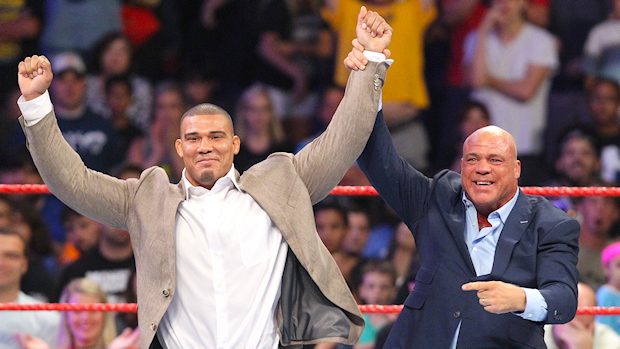 His advice to Jason Jordan:

“I tell him he needs to take chances. Jason can be a little shy. However, when you see him get in the ring, you realize he is not shy. When he is on camera talking, I need him to pull out more emotion. He is a great talent, and I believe someday he is going to be a world champion.”

His favorite wrestlers in WWE:

“I love Seth Rollins. A.J. Styles and Samoa Joe. Braun Strowman, I’m really proud at how he has come so far. He is really getting the attention of the fans, and it turns out he is this big babyface. I love all the talent there. Dean Ambrose, Roman Reigns, too. Cesaro and Sheamus, I love them as a tag team. There are a lot of talent right now. Probably now more than ever before.”

His return to WWE and wrestling again:

“I knew I wanted to finish my career in WWE. I didn’t know it was going to happen. Then I got the call this year in January, I knew it was going to be possible. It has been a lot of fun being back, doing the Hall of Fame. I’ve been able to play an ambassador role for a couple of months. Then they gave me the General Manager spot. I’ve talked to Vince [McMahon] about wrestling in the possible future. Once he clears it and off to a physical, I’ll be ready to go. Right now, I’m enjoying the general manager role. I will continue to until Vince has me do something else.”

You can check out the entire interview here.