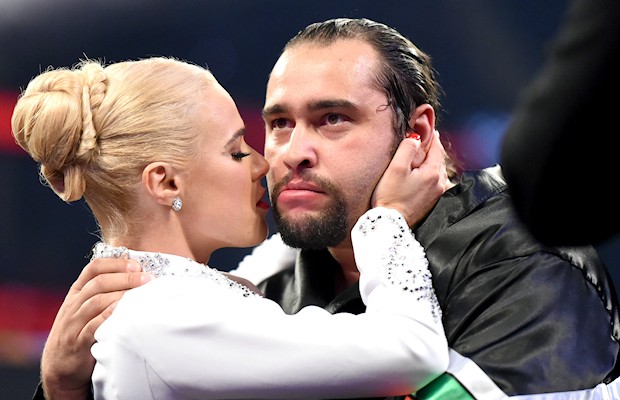 – As seen above, this week’s sitdown interview with Michael Cole features Lana and Rusev, new #1 contender to the WWE United States Champion. Below are highlights:

* Cole asks how the wedding planning is going. Rusev says it’s expensive, unlike Cole’s wedding, but he will do anything for his wife. Lana says Cole isn’t invited to the wedding

* Cole congratulates Lana on being added to the Total Divas cast and asks how it’s changed their lives. Lana says it hasn’t really changed anything because the cameras follow them. She says it’s an honor for Total Divas to have them because Rusev is a hero and she defines what a true woman means. Lana predicts ratings will go way up when they’re on the show. Rusev says he could care less about cameras always being on him

* In regards to Kalisto and the United States Title, Rusev says he’s been #1 contender for more than a year. Lana says Kalisto is a small man, almost like a little child but she admits he has a big heart. She’s happy for Kalisto overcoming obstacles but says Rusev is going to eat his heart

* Cole points out how Lana has been around more since The League of Nations broke up. Rusev says the whole League started over a card game they played backstage. Lana tried warning him it was a bad idea and she was right. He says they backstabbed him. Lana says this is why she wasn’t a part of The League, because she warned him it would fail and she wasn’t going to be a part of failure

* Rusev says it’s simple, he’s going to eat Kalisto’s heart and take his title back. Rusev says he will see Kalisto soon and when he does, he will crush him