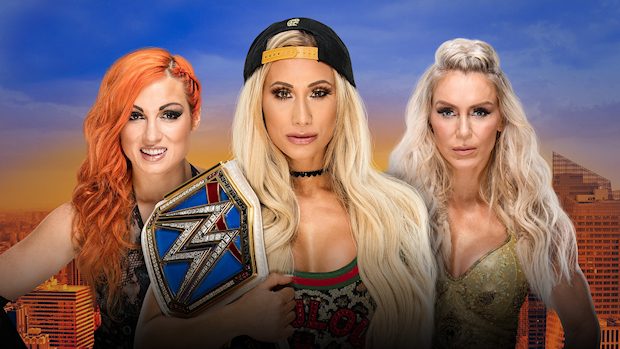 Charlotte Flair won her record-tying seventh Women’s Championship at SummerSlam, defeating Carmella and Becky Lynch in a Triple Threat Match for the SmackDown Women’s Championship. Charlotte’s victory was overshadowed by the “Irish Lass Kicking” that followed it, however.

The match result and ensuing attack angle were not planned heading into SummerSlam weekend. At least a few hours before showtime, WWE officials planned for Lynch to win the SmackDown Women’s Championship from Carmella. A last minute change was made for Flair to win instead because WWE’s creative team decided to have Lynch continue chasing the SmackDown Women’s Championship.

In this backstage interview with Cathy Kelley, Charlotte processes Lynch’s unexpected attack by recalling some sobering advice from her father, WWE Hall of Famer Ric Flair.

Lynch, meanwhile, refused to comment on her shocking assault of Flair as she looked for an exit from the Barclays Center in Brooklyn, New York.

As for Carmella, she tweeted the following on losing the SmackDown Women’s Championship.