Ricky Morton and Robert Gibson To Be Inducted Into WWE Hall of Fame Class of 2017 | PWPIX.net 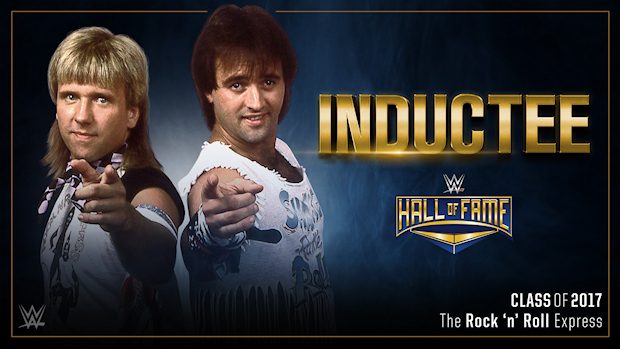 The Rock ‘n’ Roll Express, one of the greatest tag teams in wrestling history, will be inducted into the WWE Hall of Fame as part of the Class of 2017 during WrestleMania Week.

This news was first reported by CBS Sports and officially announced by WWE.

The phone call from WWE to extend the Hall of Fame invitation caught Morton and Gibson off guard. Morton considers it a dream come true.

“It was a surprise,” he told CBS Sports. “I had a message on my phone [from WWE] to call the number back. I think they got ahold of Robert at the time. When they called, it was just like a suckerpunch. It just knocked us off our feet.”

“It’s an honor for Ricky and me to go into the hall of fame,” Gibson added.

Kurt Angle has been the only other name announced for the WWE Hall of Fame Class of 2017. Diamond Dallas Page, Beth Phoenix, William Regal and “Ravishing” Rick Rude have been rumored for this year’s class.

The 2017 WWE Hall of Fame Induction Ceremony will take place on Friday, March 31 at the Amway Center in Orlando, Florida.