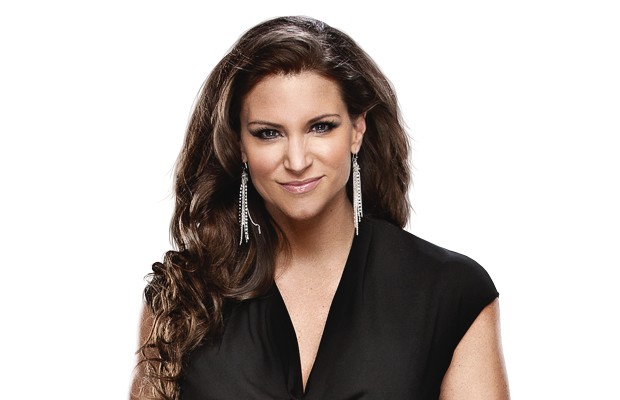 – Chris Jericho’s live WWE Network interview with Stephanie McMahon kicks off from WWE TV studios in Stamford, CT. Jericho welcomes us to the second edition of “Live! with Chris Jericho.” He welcomes his old rival Stephanie and says people want the hard-hitting questions so he’s going right to that. Stephanie just came from the annual WWE staff party and Jericho says he never knew that party existed. Stephanie says it’s just a way of saying thanks to their employees. Jericho imagines Vince McMahon walking around with a tray of h’orderves and Stephanie says he doesn’t do that. Jericho says he’s been at the studios all day and it’s “insane.” Stephanie says WWE currently has 800 employees.

Stephanie talks about being in Singapore, Beijing and Shanghai recently on behalf of WWE and as an Eisenhower Fellow. Stephanie talks about what the program is. She notes that she will be going on another trip for the program later this year. Stephanie mentioned having to defend WWE while on tour and Jericho can’t believe that they still have to defend WWE but they do. Stephanie says that’s part of her job. She touts some WWE talking points and says they’re a pioneer. Jericho asks about working for dad and she says it’s very challenging. She says Vince is exceptionally driven and passionate. Jericho says Vince is off to the side right now giving them the middle finger. Stephanie says there’s a lot of pressure on Vince’s kids to do better. She says Vince didn’t grow up with a silver spoon in his mouth and while he’s given her all of her opportunities, he still wants her to fight for it every day and that’s what she does. She talks about messing up before and says disappointing Vince is the worst. As a performer, Vince has made her re-shoot certain angles. Jericho says he has had to do that before and it makes you feel like a loser. Jericho says Stephanie is just like Vince on TV. Stephanie says her brother Shane McMahon calls her the “Vincess.” Stephanie says she’s unaware that she emulates him but she’s watched him all her life and there’s no one better.

Jericho says Vince has left the set and jokes that he scared him off. Jericho asks if people get the Chief Brand Officer mixed up with the on-screen Stephanie when she’s out working. She talks about how she tells kids at the “be a STAR” anti-bullying rallies that she plays a bully on TV but that’s not who she is in real life. They talk about her childhood and she says she did understand what her dad did. One of her earliest memories was between 3-6 years old, walking backstage and running into George “The Animal” Steele in full character. She says she was scared to death and ran back to Vince but George just started laughing. She says George was laughing as if he didn’t take her fear seriously and that confused her at the time. She says Vince also thought it was hilarious and that’s when she started putting it together. She would watch Vince announce on WWF and she had her favorites – The Killer Bees and Tito Santana. She says she gravitated more towards the heels as a kid and did not root for Hulk Hogan.

She talks about having a bond with Andre the Giant and tells a story about meeting him at age 3 and stepping into his hand. She says she noticed people always treated Andre different and that bothered her. She says when people found out she was Vince’s daughter as a kid, they treated her different also and she could relate to Andre. Jericho asks about people’s reaction to who her father is. Some thought it was cool but some were judgmental, snobby and would turn their nose up at her. Vince told her that not everyone will like her but as long as she can look in the mirror and know she’s a good person, she will be all set. Stephanie says she’s tried to live her life that way. Jericho asks if she and Shane play wrestled as a kid and she says they did. She jokes that she was probably in every wrestling hold as a kid. Jericho asks if she had any crushes as a kid. She was in love with Bo Duke from the Dukes of Hazzard. Jericho asks how she started in the family business. She says it was what she always wanted to do and it kind of surprised Vince. She started out answering the phones at WWE headquarters, back before they had automated systems. Stephanie went from working the phones to working in various departments. She says she had to have a job every summer because her parents wanted her to learn the value of a dollar. She says she did interning for WWE back in the day and would get on the AOL chats and chat with fans. She says some figured it out. She talks about working with and observing her mom work, then spending 6 months working in Vince’s office. She then went to work in the sales office and became a low level sales person but that was around the time she started performing on TV. She says Vince forbid her to date wrestlers because it was bad for business but she feels Vince threw her together with Triple H. She talks about how once they started dating, Vince told them they couldn’t date but they got together about a year later and eventually it all worked out.

She says when the locker room found out about their relationship, most of the backlash was on Triple H. Jericho talks about how there were no limits with her character at one point and she was fine with it all. They talk about some of the angles they worked together years ago. Jericho brings up Stephanie’s breast enhancement surgery and Stephanie says it was so obvious they just wanted to call it out. Jericho talks about making jokes on her breasts at an event in Chicago after she had the surgery. Stephanie says at one time she was heavier and then lost weight but didn’t like how she looked so she made the decision to have the surgery and was proud of it. Jericho says he heard Stephanie will be the one to carry WWE into the future and not Shane but it’s because Stephanie is more like Vince. He asks how it is not having Shane here. She says they grew up together and he was her protector. She says this was a business and a passion that they always shared but Shane made the decision to go do other things and she supports that. She adds that it is hard not having him here and she misses him. She talks about how fun it is to work with Shane and how entertaining he is. Jericho asks if she still has a good relationship with Shane and she says they do. They’re planning to get together on Mother’s Day but she wishes they could spend more time together. Stephanie mentions how Linda McMahon also retired. She says the hardest things she ever had to do was slap her mom and kiss Eric Bischoff. She says she almost threw up backstage after having to slap her mom but her mom was very excited and hadn’t felt that adrenaline rush before.

Jericho talks about how Stephanie has the hardest slap in the business. She thinks the hardest one she’s delivered is the one to The Rock at WrestleMania 31 this year. Jericho asks about the segment with Rock, Triple H and Ronda Rousey. Jericho said he watched it as a fan and Stephanie ordered Rock out of the ring very convincingly. Stephanie doesn’t know what the overall plan is and we’ll see if anything ever happens but talks about how fun it was. She brings up how the fans started chanting for Ronda before the angle happened and they had the feeling it was going to work well. She talks about how she’s a big fan of Ronda and says it’s awesome how Ronda is drawing main events for UFC. Stephanie says Ronda is inspiring and she wants her daughters to look up to someone like that. She says Ronda is paving the way for women and is a legitimate badass. Stephanie calls Rousey incredible. Jericho brings up a possible match and Stephanie says she has thought about it but it’s not a plan right now. They both acknowledge the recent comments from Dana White on Rousey not being able to wrestle a match but she kind of brushes it off. Jericho asks how they incorporate some of Rousey into the current Divas. She’s excited about doing more with the Divas and is hoping to push for it everyday. Jericho asks about the #GiveDivasAChance campaign and she says it’s an organic campaign started by fans that trended for three days. She says it was so important that Vince tweeted about it. She says it’s something that definitely needs to happen. Jericho brings up when AJ Lee called Stephanie out over equality on Twitter a few months ago. Jericho say she responded diplomatically but ass if it pissed her off. She says it didn’t piss her off as much but she had to respond diplomatically. She believes the hashtag started at the same time as AJ called her out and AJ was responding to her tweet about Patricia Arquette but AJ’s response wasn’t really commenting on the hashtag campaign. Stephanie says she’s fully behind the movement. They both praise the NXT Divas and hopes it transitions to the main roster. Stephanie believes we could see Divas main event RAW again but it’s got to be the right story and they’ve got to make it happen.

They talk more about Rousey an the WrestleMania angle. Stephanie admits she enjoys being a bitch when she’s in character. She says fans want her to be the most evil, power hungry, stuck up bitch that she can be. Stephanie says she loves feeding off the crowd and getting boos is about the best part of her job. They both comment how being a heel is the best. Jericho brings up the Vickie Guerrero farewell angle and asks what she was thrown into. She says it was pudding that was mixed up by a lot of crew members and their feet earlier in the day. She says it was nasty and she ended up getting an infection in her eye. She was sad to see Vickie go for many reasons. She also felt like Vickie was an extension of Eddie Guerrero. She says it was an honor to do the farewell with Vickie and says she’s getting goosebumps talking about it. Jericho asks if it’s hard always being around her significant other. She says they’re really not around each other a lot as they travel to different WWE events besides RAW and then have different roles in the office. She says they probably do talk too much about business but they’re working on putting the phones away when they’re together. She talks about Triple H the dad and says he’s an amazing father. Jericho asks who wears the pants and she says they both do. She says her oldest daughter is very interested in the business, has trained with Natalya and is a natural heel, and even wrote a book about wanting to be a Diva. Her favorite match is the SummerSlam match with Brie because it was her first match in 11 years. Jericho thanks her for the interview and they both say it’s been fun. Jericho says Stephanie is one of the coolest people to go through all she has. He thanks her again and they toast before Jericho plugs his Talk Is Jericho podcast to end it.