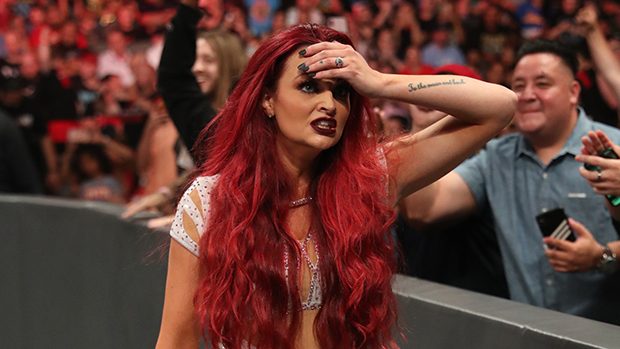 Mike Kanellis has been on a quest to boost his standing in WWE and on Raw this week, he and his wife Maria challenged Seth Rollins and Becky Lynch to a Mixed Tag Team Match in the hopes of supplanting them as WWE’s pre-eminent power couple. It did not go well for them.

Rollins overwhelmed Mike and forced him to tag in Maria, thereby summoning Becky in per Mixed Tag Team Match rules. Becky gladly would have thrown fists had Maria not weaseled out of it by grabbing the mic at ringside and claiming she was pregnant before berating Mike for not being man enough to be the father. Becky quickly changed course by submitting Mike with the Dis-arm-her, though his troubles were just beginning.

Maria got in the ring and unloaded on her husband for his perceived lack of manhood, claiming the only “man” in the ring was Lynch, and she might have been better off if Becky was the father of her children.

According to Dave Meltzer in the Wrestling Observer Newsletter, Paul Heyman is the main person behind the angle. After being named Executive Director of Raw last week, Heyman had “his fingerprints” on the show as a number of his ideas were used.

According to Ryan Satin of Pro Wrestling Sheet, there was a pitch a few weeks ago for a cucking angle involving the married couple.

Annnnnd now she says she’s pregnant, but she doesn’t think Mike is man enough to have been the one to do it …

The top definition for cucking on Urban Dictionary is: “To enjoy arranging for and watching other men have rough demeaning sex with one’s wife. Often perceived as a masochistic humiliating experience for the husband as opposed to normal swinging.”

This would certainly fall in line with Maria berating Mike and referring to him as her “bitch.”