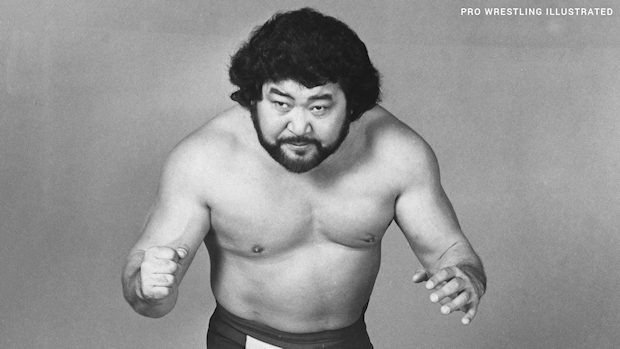 The Wrestling Observer’s Dave Meltzer believes Saito had the most successful long-term career of any Japanese native on the North American scene, being a championship-level wrestler in multiple territories from 1968 to 1990. While Giant Baba in the 1960s, The Great Muta, and now Shinsuke Nakamura would be considered bigger stars, Saito spent the majority of his career in the United States as opposed to a couple years in the case of the aforementioned.

During most of his wrestling career, he portrayed the stereotypical salt-throwing Japanese heel, a role mostly played by Hawaiians rather than Japanese natives.

While Saito achieved success as a singles wrestler, such as winning the AWA World Heavyweight Championship in 1990, he is best known for his success as a tag team wrestler with multiple partners in various territorial organizations in North America.

From 1968 through 1981, Saito mostly wrestled for promotions in California, Florida, and Alabama that were affiliated with the National Wrestling Alliance (NWA). After racking up countless championships, he joined the World Wrestling Federation (WWF) in July 1981.

Upon his arrival, Saito joined forces with Mr. Fuji, and under the tutelage of Captain Lou Albano, the two captured the WWF World Tag Team Championship on two separate occasions. He left the promotion at the end of 1982.

In 1984, Saito gained notoriety for his arrest in connection with fellow wrestler Ken Patera allegedly throwing a boulder through the window of a McDonald’s restaurant in Waukesha, Wisconsin.

According to police, on April 6, 1984, Patera was refused service after the McDonald’s had closed and then in retaliation, he threw a boulder through the restaurant’s window. The responding officers testified that later, when they arrived at Saito and Patera’s hotel room to investigate someone matching Patera’s description in connection with the criminal damage report, Saito was uncooperative and both wrestlers assaulted the officers, taking turns beating them until other officers arrived to subdue them. As a result of the incident, Saito and Patera were convicted of battery of a police officer and sentenced to serve two years in prison.

Following his release from prison, Saito mainly wrestled in Japan, where he became involved in a feud with Antonio Inoki. To settle the feud, the two competed in an Island Deathmatch on October 4, 1987. They were placed on Ganryujima Island and wrestled a match that lasted 125:14 and spread across the island. Ultimately, Inoki was victorious, defeating Saito by technical knockout.

Saito’s final major title came in the American Wrestling Association (AWA), where he defeated Larry Zbyszko for the AWA World Heavyweight Championship in front of a hometown crowd of 63,900 fans at the Tokyo Dome on February 10, 1990. He lost the title two months later in a rematch with Zbyszko at SuperClash 4. While wrestling in the AWA about a decade earlier, Saito formed a tag team with Jesse Ventura known as the Far East-West Connection.

Saito also had a couple short stints in World Championship Wrestling (WCW). His first came in 1990, which saw him team with The Great Muta for the Pat O’Connor Memorial Tag Team Tournament at Starrcade 1990: Collision Course and they lost to The Steiner Brothers in the finals. He briefly returned in 1995 and most notably had a match at that year’s Starrcade. Wrestling as part of a series of matches between New Japan Pro Wrestling and World Championship Wrestling, Saito lost his match to WCW representative Johnny B. Badd (aka Marc Mero) via disqualification. Saito was accompanied by Sonny Onoo, and Badd had Kimberly at his side.

He largely wrestled in Japan during the 1990s before retiring on February 14, 1999. His last match (which took place that day) was a loss to Scott Norton, who was splitting time in Japan and WCW.

WWE.com acknowledged his passing with this statement:

WWE is saddened to learn that Masa Saito, a former World Tag Team Champion and AWA Champion, passed away on Saturday at the age of 76.

Saito’s career in grappling began in freestyle amateur wrestling, and he represented his home country of Japan in the 1964 Summer Olympics in Tokyo. Turning pro in 1965, he utilized a punishing style in the ring that made him a feared competitor in both Japan and the U.S. Saito spent time competing in California, Florida and Alabama, racking up championships before heading to WWE in 1981.

Upon his arrival, Saito joined forces with Mr. Fuji, and under the tutelage of Captain Lou Albano, the two captured the World Tag Team Championship on two separate occasions. Saito later joined Verne Gagne’s AWA, where he defeated Larry Zbyszko to become AWA World Champion in his home country at the Tokyo Dome.

Saito continued to compete, mainly in Japan, with several appearances for WCW, before retiring in 1999.

WWE extends its condolences to Saito’s family, friends and fans.