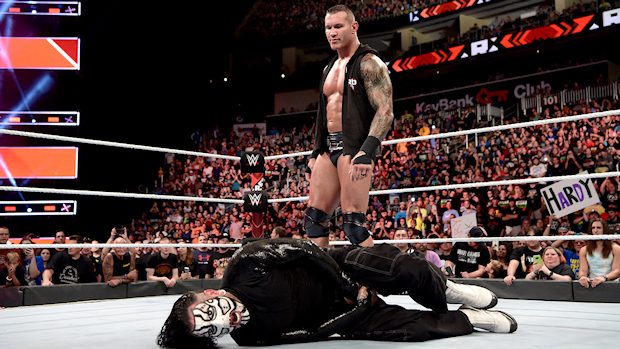 Randy Orton is back and he made a statement last night WWE Extreme Rules.

The opening bell hadn’t even rung before “The King of Strong Style” made his move on Hardy, flooring the champion with his signature move — the low blow — behind the ref’s back. Hardy struggled to his feet and insisted on starting the match, only to suffer an instant Kinshasa that snapped his reign and landed Nakamura the first championship of his WWE tenure.

Nakamura’s celebration was cut short by the arrival of Orton, but while the former United States Champion appeared to be sizing up Nakamura, he surprised fans by turning his attention to Hardy and administering a punishing stomp to the groin before making his exit. Having seemingly turned heel, Orton then made his way to the back, leaving Nakamura in a state of confusion.

Later during the show, the announce team said that Hardy wanted a rematch against Nakamura on this week’s episode of SmackDown LIVE. They added that SmackDown LIVE General Manager Paige had yet to sanction the match.

According to PWInsider, Orton was hidden backstage in a bus until about 30 minutes before he made his return. His wife Kim also appeared at ringside for that specific segment, but that’s nothing new. Often times at WWE pay-per-view events, Kim will appear at ringside for Orton’s appearance on the show and then head backstage when it’s over.

On Instagram, she posted a photo of herself with Kurt Angle’s wife Giovanna.

She also posted a brief video of Orton backstage getting ready for his return.

Prior to Extreme Rules, Orton last appeared on WWE television on May 6 at Backlash, where Hardy beat Orton to retain the United States Championship. WWE announced on May 18 that Orton underwent successful surgery to repair a medial meniscus tear in his left knee.

According to the Wrestling Observer’s Dave Meltzer, Orton suffered the tear late last year and was working with the injury for months. He was waiting for all of his WWE programs to get wrapped up before undergoing surgery.

WWE did not offer a timetable on when Orton would be able to return to action, but Meltzer reported in May that he was scheduled to return this month.

Orton’s return looked to be drawing near last week as he was spotted in Orlando, Florida on Thursday, likely visiting the WWE Performance Center to get back into “wrestling shape.” Two fans spotted him at Orlando International Airport and they snapped a photo together.

So ran into Randy Orton. I think I can take him🙅🏼‍♀️