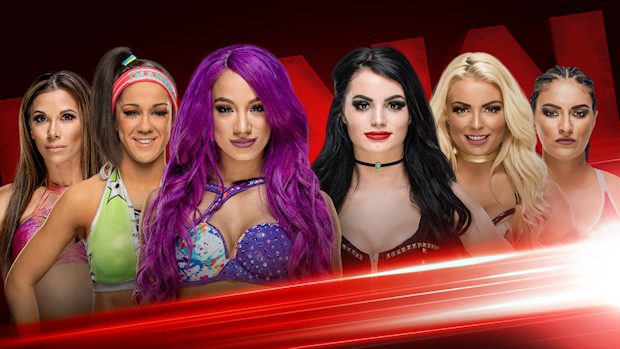 Two more matches have been announced for tonight’s Raw from the Dunkin’ Donuts Center in Providence, Rhode Island.

In a rematch from WWE Tribute to the Troops, Sasha Banks, Bayley, and Mickie James will battle Absolution. WWE.com’s preview of the match is as follows.

Paige, Mandy Rose & Sonya Deville gave Asuka a choice: Either she joins Absolution, or she becomes their enemy. The Empress of Tomorrow chose the latter, and soon fell victim to a three-on-one beatdown like so many Superstars before her.

Absolution defeated Bayley, Sasha Banks & Mickie James at WWE Tribute to the Troops, but the trio battles Paige and her ruthless friends in a rematch tonight. With the entire Raw Women’s division cheering them on, can The Boss, The Huggable One and the six-time Women’s Champion prevail?

Also announced is Seth Rollins vs. Samoa Joe. WWE.com’s preview of the match is as follows.

One week after Samoa Joe defeated Dean Ambrose, The Lunatic Fringe’s Shield brother Seth Rollins will have a chance at retribution when he continues his longstanding rivalry with The Samoan Submission Machine tonight, live on Raw.

When Joe debuted on Raw earlier this year, he injured The Architect’s knee and nearly forced Rollins to miss this year’s WrestleMania. With that in mind, Rollins will undoubtedly hold nothing back when he collides with the juggernaut in what’s sure to be a must-see Raw encounter.

Here is the updated line-up.

* After winning a “Second Chance” Fatal 4-Way Match last Monday Raw, Cedric Alexander will take on Drew Gulak, with the winner of that contest going on to challenge Enzo Amore for the WWE Cruiserweight Championship.