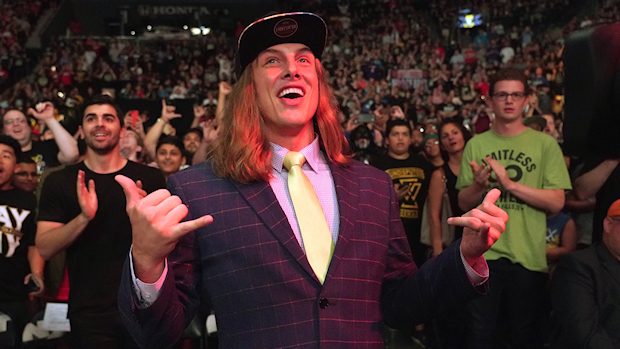 Matt Riddle appeared at NXT TakeOver: Brooklyn IV tonight, officially confirming a rumor that gained steam over the past month.

Before the NXT North American Championship Match between Adam Cole and Ricochet, an excited Riddle was shown sitting in the front row. On commentary, Mauro Ranallo said that the rich get richer and called Riddle another blue-chip signing for NXT. He briefly mentioned Riddle’s mixed martial arts past and said he’s taken the pro wrestling world by storm. Riddle, who is referred to by fans as “The King of Bros,” also got a “Bro” chant going.

Are you as excited to see #MattRiddle in Brooklyn as HE is to BE in Brooklyn?!@SuperKingofBros #NXTTakeOver pic.twitter.com/wOP2y9yRhY

In case anyone is wondering, yes, Matt Riddle IS wearing flip flops with his suit. #NXTakeOver pic.twitter.com/x9jPCjIhOl

The 32-year-old dropped the EVOLVE Championship to Shane Strickland earlier this month and faced PCO at Joey Janela’s Lost in New York event on Friday night. He was originally scheduled to wrestle for Over the Top Wrestling in Ireland this weekend, but pulled out of the show due to a “scheduling conflict.”

WWNLive/EVOLVE released a 10-minute short film on Riddle’s farewell to the company following his appearance at TakeOver.

After making his wrestling debut in February 2015, Riddle won Rookie of the Year and Most Improved in the 2016 Wrestling Observer Newsletter Awards.

WWE.com confirmed that Riddle has signed on as an NXT Superstar in this statement:

As NXT TakeOver: Brooklyn IV erupted inside Barclays Center tonight, the NXT Universe got a chance to see the newest addition to the black-and-yellow brand.

Matt Riddle, or as he is often referred to by fans, “The King of Bros,” has been announced as the newest Superstar to wave the NXT flag. Fittingly, the news was revealed as he was ringside for tonight’s huge WWE Network special event in Brooklyn.

The former wrestling champion and UFC fighter made a name for himself in the indie circuit, capturing titles such as the EVOLVE Championship and the PROGRESS Atlas Championship.

The announcement of Riddle’s signing adds another layer of excitement and competition to the black-and-yellow brand.