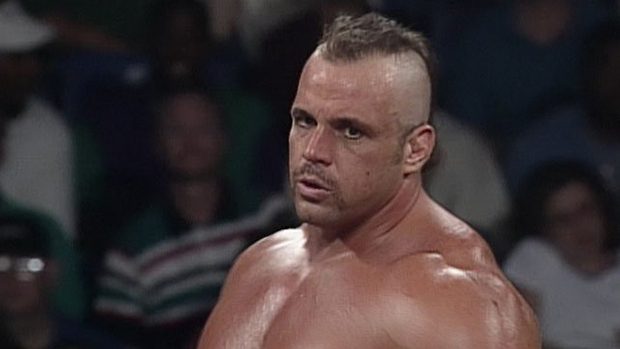 “I wanna send out my condolences to the family and friends of my buddy & former body guard #MaxMuscle aka John Czawlytko. Max passed on Thursday June 27, 2019. Max was very instrumental in some early matches with @MarcMero. He was a great guy & will be missed,” Page wrote.

After making his wrestling debut on the independent circuit in 1992, Czawlytko joined WCW in 1993 as Big Bad John. He was rechristened Maxx Muscle (sometimes spelled Max Muscle) when he became Page’s bodyguard in 1995, but their alliance ended by the end of year. He then became Maxx in The Dungeon of Doom as the group was fizzling away in 1996. After leaving WCW the following year, he continued wrestling sporadically on the independent circuit, but pretty much disappeared from the spotlight.

Standing six-foot four and weighing 315 pounds (with little fat), Czawlytko was an avid bodybuilder who decided to become a professional wrestler in his late 20s. He began wrestling in 1992 for some independent promotions in Maryland and Virginia before moving to Florida to continue his career. While in Florida, he wrestled under the ring name The Brute and as part of a tag team called The Skull Crushers alongside Bryan Carreiro, who performed under the ring name The Beast. WCW officials took notice of Czawlytko and signed him to a developmental contract in 1993.

After undergoing wrestling training at the WCW Power Plant — WCW’s wrestling school — he made his debut in September 1993 under the ring name Big Bad John. Czawlytko was primarily used as an heel enhancement wrestler, with his most notable match taking place in late 1994 in a loss to United States Champion “Hacksaw” Jim Duggan on an episode of WCW Pro. He also once to lost to Ricky “The Dragon” Steamboat (as seen below).

In spring 1995, he was repackaged under the ring name Maxx Muscle (sometimes spelled Max Muscle) and became Page’s bodyguard. He often helped Page cheat in arm wrestling contests, not to mention wrestling matches. Muscle wrestled as well, but found little success. In August 1995, he unsuccessfully challenged Renegade for the WCW World Television Championship (as seen below).

Muscle used the full nelson as his finishing move (as seen below in a rare win).

His alliance with Page ended at the end of 1995 and Muscle turned face. They faced off on the December 24, 1995 episode of WCW Main Event, with Page coming out on top (as seen below).

Muscle’s face turn was short-lived as he turned heel again in March 1996, but was only used as a jobber.

He became Maxx in The Dungeon of Doom as the group was fizzling away in spring 1996. Maxx worked singles and tag team matches, but found little success. On the May 27, 1996 episode of WCW Monday Nitro, Maxx unsuccessfully challenged Lex Luger for the WCW World Television Championship (as seen below).

After teaming sometimes with Hugh Morrus, Meng and The Barbarian, Muscle was primarily used as a singles wrestler (while still a member of The Dungeon of Doom). He scored a few wins, beating the likes of Mr. JL (as seen below) and Chavo Guerrero.

After putting over Page twice in March 1997, Maxx wrestled a few more times for WCW before leaving the promotion.

Czawlytko resumed wrestling on the independent circuit in 1999 for Maryland Championship Wrestling (as Maxx Muscle), but achieved little of note. He largely disappeared by 2000, although some websites say he continued wrestling intermittently as late as 2009.

According to Czawlytko’s Facebook page, he was living in his hometown of Baltimore, Maryland.