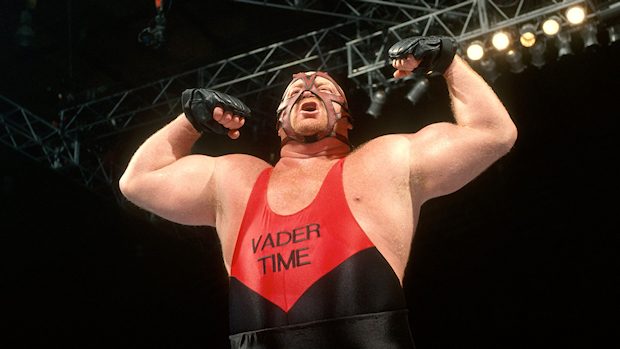 After Vader’s passing Monday night following a hard-fought battle with pneumonia, countless people took to social media to share their thoughts and memories in honor of the masked powerhouse.

My heart is heavy with the news of Leon White’s passing. He was an amazing performer who brought out the very best in so many. Best big man ever, the most effective monster heel of his generation. My heartfelt prayers to his loved ones, and my gratitude for having known him. pic.twitter.com/uy3yBfwZOs

Loved working with Leon, loved the friendship I had with him for many years, and especially these last 8 months of his life. He will truly be missed.

Sorry To Hear About The Loss Of Another Great! Rest In Peace My Friend! pic.twitter.com/O0NvIINS3l

Leon White entertained (and intimidated) audiences all over the world with his size, strength, and agility. Saddened to hear of his passing and our thoughts are with his family at this time. #RIPVader pic.twitter.com/5jtryoSvpI

I’m saddened to hear about the passing of Leon “Baby Bull” White aka “Big” Van Vader! My prayers of strength go out to his family at this time, I’m sorry for your loss. #RIPVADER

Rest in Power Big man. A shame we never got to mix it up more. #VaderTime pic.twitter.com/mFIEUfY1xE

I met Vader on a show in Chicago 4-5 years ago. Incredibly nice person. RIP

My prayers and thoughts go out to the family Of truly one of the greatest big men to step foot in the ring. Vader my friend May you R.I.P

Maaaaan…Vader was my guy as a child and was a sweetheart when he came down to FCW to help train us. I’m forever grateful for the conversations I was able to share with him. Condolences to Leon’s son, Jesse, and the rest of his family.

Thoughts & prayers go out to the family & friends of Leon White after his passing. @itsvadertime made an ENORMOUS impact on our industry. Godspeed, Big Van Vader.

Sad to hear about the passing of Vader. He was one of the all time greats. My prayers go out to his family, may he rest in peace. #RIPVader pic.twitter.com/6Lk3nuP4kA

Only a handful truly revolutionize the business I love. This man was one of them. I grew up in awe of him and eventually admired him.
“No Pain!”#RIPBigVanVader 🖖🏼 pic.twitter.com/IVDvoktWgO

Vader was one of the 1st big men to show that big didn’t mean limited skills, speed or agility. He was a beast & was not afraid to try NHB either! I had my 1st WWF match with him & was very pleased with his toughness & endurance. My prayers go out to his family & friends. pic.twitter.com/ITfYMWie06

Vader’s last @WWE PPV was a match with me, he wanted me to kick out of his finish/he told me “today you get the old Vader, I want it to mean something when you win.” RIP big man, and thanks! #respect pic.twitter.com/t3FiP2jMmh

Lifting you and family up in prayer brother. pic.twitter.com/LOnmqGNTD5