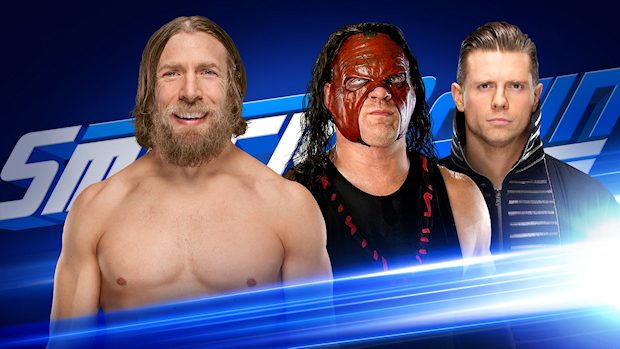 A “Miz TV” segment and two more matches have been added to the line-up for SmackDown LIVE’s go-home show for WWE Extreme Rules.

Ahead of challenging The Bludgeon Brothers for the SmackDown Tag Team Championship this Sunday, Daniel Bryan and Kane will kick off SmackDown LIVE on “Miz TV.”

Sin Cara vs. Almas was originally scheduled to take place on the June 12 edition of SmackDown LIVE, but it was canceled when WWE explained that, due to Sin Cara suffering a storyline shoulder injury when Almas attacked him the previous week, Sin Cara wasn’t able to compete. Neither has wrestled on SmackDown LIVE since, and Almas has only wrestled twice on the show since being promoted to the main roster from NXT in April. Both matches were against enhancement talent.

Sin Cara has been Almas’ regular opponent on house shows, and Almas defeated him in a dark match prior to last week’s show.

Joe vs. Dillinger was set up in a post-show video last week. R-Truth told Joe that he didn’t stand a chance against Dillinger, Joe asked Dillinger if that was true, and Dillinger challenged him to a match.

WWE Champion AJ Styles vs. Shinsuke Nakamura in a non-title match is also advertised for SmackDown LIVE, along with Asuka vs. James Ellsworth in a Lumberjack Match. The show is being held at the SNHU Arena in Manchester, New Hampshire.