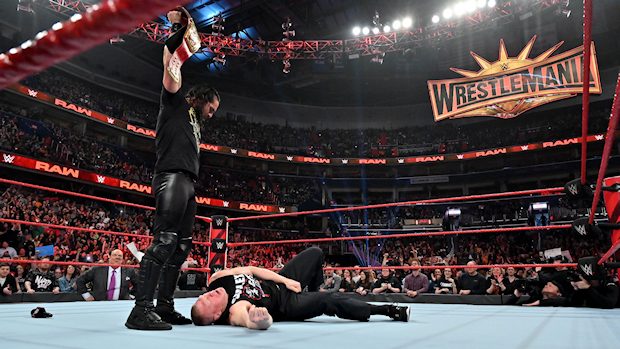 Shortly before Raw went on the air Monday night from Washington D.C., Vince McMahon changed the outcome of the Seth Rollins and Brock Lesnar segment that took place during the first hour of the show.

Six days before their Universal Championship Match at WrestleMania 35, Rollins got the upper hand on Lesnar. The challenger interrupted Paul Heyman, went face-to-face with the champion, and insisted that while victory was certainly improbable, it wasn’t impossible. “The Architect” then nailed Lesnar with a pair of low blows and pancaked his head into the mat with a Stomp, leaving the Universal Champion down on the mat.

Original plans called for Lesnar to lay out Rollins to draw more heat from fans.

“That segment was originally written to go the other way. Right before the show started, they switched it,” Dave Meltzer said after Raw on Wrestling Observer Radio.

“It was a Vince call and it was the right call,” Meltzer added. It was a good move because it’s been portrayed like Lesnar will blow by Rollins on Sunday so the segment on Monday may have helped to sway some fans into believing that Rollins has a chance to win.”

According to Dave Meltzer in the Wrestling Observer Newsletter, it was Lesnar and Heyman’s idea to change the outcome of the angle. They pitched the idea at Raw, which is why it got changed late.

“This was a late decision by Vince for Rollins to look strong as the segment at first was written for Lesnar to get heat on him. It was also a Lesnar call with Heyman and Lesnar pitching Vince day of. After the way the storyline has played, this to me was the right call,” Meltzer wrote.