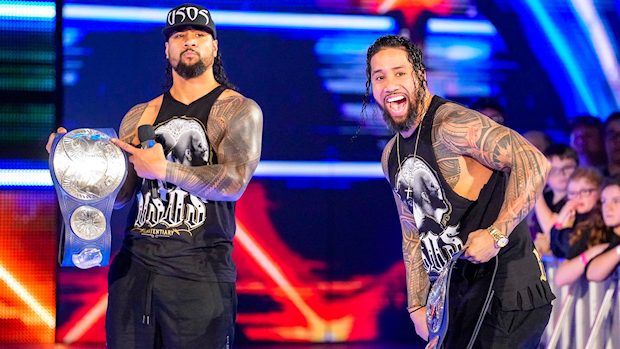 — The Usos have reportedly re-signed with the WWE.

According to a report today by PWInsider, WWE has come to terms with Jey and Jimmy Uso on new contracts. The duo signed the new deal several weeks ago. Their current contracts are due to expire at the end of the month.

This Sunday at WrestleMania 35, The Usos will put the SmackDown Tag Team Championship on the line against Ricochet and Aleister Black, Shinsuke Nakamura, and Rusev, and Sheamus and Cesaro in a Fatal 4-Way Match.

— This Sunday at WrestleMania 35, the female Superstars of Raw, SmackDown LIVE and NXT will compete in the second annual WrestleMania Women’s Battle Royal on Sunday, April 7. Thirteen competitors have been announced for the contest so far, but the most notable omissions are Lacey Evans and Alicia Fox.

Both Evans and Alicia Fox are only active women on the main roster not advertised for anything at WrestleMania. Fox has been off the road since working a match while intoxicated at a WWE Raw live event in Saginaw, Michigan on February 10. Fox, will, however, be on hand for WrestleMania Week festivities. According to WWE.com, she is scheduled to appear at WrestleMania Axxess this Saturday from 8 a.m. to noon.

As for Evans, there’s no word yet on whether she’ll work the match. Dave Meltzer speculates in the Wrestling Observer Newsletter that she will, or at least appear at WrestleMania in some form.