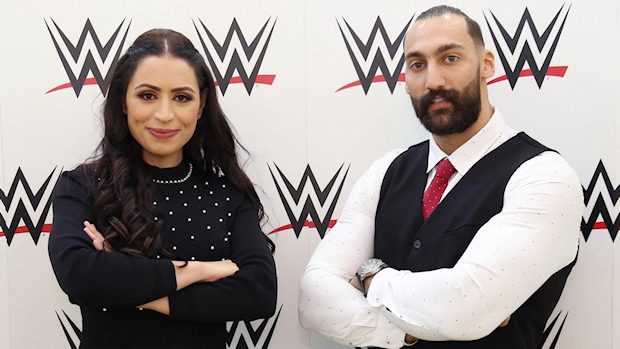 Nasser Alruwayeh and Shadia Bseiso, who made news in December 2017 as the first Kuwaiti man and Arab woman to sign a developmental contract with WWE, have reportedly been released.

This is according to Casey of Squared Circle Sirens. However, both weren’t let go for the same reasons.

According to Casey, WWE officials made the decision to cut Alruwayeh from the Performance Center roster. Bseiso, who is engaged to Alruwayeh, then requested her release, which the company granted.

Alruwayeh and Bseiso announced their engagement last January on Instagram.

We’re so happy to share with you the news of our engagement! Wishing you and your loved ones the best year to come.

We’re so happy to share with you the news of our engagement! Wishing you and your loved ones the best year to come!

Alruwayeh and Bseiso caught the eye of WWE coaches during a 2017 invitational-only tryout in Dubai, where their performance led them to the historic contracts that sent them to the Performance Center. Bseiso’s contract signing was announced in October of that year, while Alruwayeh signed two months later. Triple H welcome them both to WWE in December 2017 at a press conference in Abu Dhabi.

Alruwayeh and Bseiso reported to the Performance Center in January 2019 to begin their wrestling training. Alruwayeh made his in-ring debut in September at an NXT live event but didn’t wrestle much afterward.

Bseiso never wrestled at a live event despite her prolonged training. She did, however, work a variety of speaking roles. Bseiso appeared as a backstage interviewer at the Mae Young Classic last summer and hosted the Arabic version of WWE Now. In February, she began working as a manager for Mansoor (aka Mansoor Al-Shehail) at NXT live events. She acted as his mouthpiece and referred to herself as a promoter and Mansoor as his client.

I’m so happy to be part of NXT Live! #WeAreNXT @wwenxt #shadiabseiso

As heels, they achieved some success. Mansoor scored wins over the likes of Daniel Vidot, Saurav Gurjar, Mars, Boa, and Brendan Vick. The two, however, never appeared on TV together.