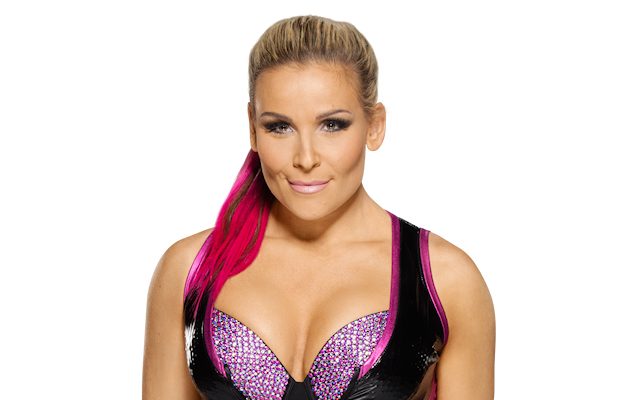 Natalya recently spoke with Brian Fritz of Sporting News to promote Sunday’s WWE Extreme Rules pay-per-view. The full interview is at this link. Below are highlights:

SPORTING NEWS: Let’s talk about Raw from Monday night. It was yourself and Charlotte in the final segment of the show, the main event segment. Tell me what the day was like earlier — how and when did you find out that the two of your were going to be in that slot?

NATALYA: It was shocking to find out. I got to the arena and then we were told that you guys are on last. We were like “oh my God.” Not only are we main-eventing Raw but we’re closing Raw. It was surreal. And it’s still surreal. I was on my drive last night from Greensboro to Greenville and I was just processing it all, taking it all in and going wow. I can’t believe I did that. Just being able to hold up that Women’s Championship and to think about wrestling for 15 years and after going through the highest of highs, the lowest of lows. Being in that ring with Shane McMahon, Stephanie McMahon, Ric Flair and Charlotte Flair. You have the McMahons, the Harts and the Flairs and it doesn’t get any bigger than that in wrestling when you think about wrestling hierarchy and royalty. Our families have done so much over the years for this.

SN: How difficult was last year? There was the Divas Revolution, we were seeing some of the women move from NXT to WWE but we weren’t seeing much of you. There were a lot of people that had your back and wondering where you were in that process.

NAT: Last year, 2015, was by far the hardest of my life. I was going through a lot personally. I had to take care of all that but I really wanted to be a part of the Divas Revolution because I had waited my whole career for something like that. I had waited my whole career to wrestle with girls like Sasha Banks and Becky Lynch and Charlotte. I wanted to be a part of that more than anything. Looking back on it now, I’m almost kind of glad that maybe it didn’t work out that way because sometimes better things are … Maybe if I had been a part of all that, I wouldn’t have been main-eventing Raw (Monday) night. It brought me to a level of clarity. Going through that hard time, I’m kind of sitting on the sidelines and having to handle the things that I was going through and then having to rise up and rise above all of it.

Coming back from my broken ankle — that’s why I was so devastated when I broke my ankle because I didn’t want to believe, I didn’t want to be hurt. I finally got back into the mix and I finally re-debuted after being out the whole summer and then I get hurt. Then I realized looking back on it now, all those things happened for a reason. Some of them I don’t know the reasons for but everything that happened to me last year made me stronger. And it’s going to help me come Sunday at Extreme Rules when I tap Charlotte Flair out. I will. I will beat her at Extreme Rules and I hope that she’s going to be as prepared so it as I am.

SN: We see how much NXT has done for Charlotte, Becky Lynch, Sasha Banks and so many other performers. You were someone who had already been on the main roster and then you spent some time in NXT. What did NXT do for you and your career, especially at that time?

NAT: My husband and I — TJ WIlson aka Tyson Kidd — we love NXT. And we loved performing in NXT. It really was and is our favorite show. It just helped us find ourselves again because sometimes when you’re in the hustle and bustle of this fast-paced world that we are in with the WWE. It’s a moving machine and everything is moving so fast. For TJ, he connected with Dusty Rhodes in a way that people have no idea. TJ never had a dad. He never knew his father and Dusty kind of became a dad to TJ. TJ would drive two hours there and two hours back to do a one minute promo with Dusty. That’s the thing about NXT, you have those resources and Dusty was one of those resources. Obviously, we all miss him today.

NXT has changed people’s lives that love this business because it helps them rediscover themselves and really shine. To be unafraid and color outside the lines. That was the same thing for me. Triple H believed in me. He gave me the opportunity with Charlotte. He didn’t really give me any boundaries because he believed in me and gave me this surge of confidence that, as a woman, is a priceless feeling when someone believes in you. There’s so many resources down there in NXT. Sara Del Rey, that’s somebody I worked with in Japan and now she’s working with the women and she loves wrestling. I collaborate with her still to this day on ideas for matches. I go down there and train and she helps me. I always want to get better. I actually heard Sasha Banks say that in an interview a couple of weeks ago. She said I never want to stop training and learning and growing. I’ve been wrestling for 15 years and I just love moving forward and growing. And I love helping other people find that in themselves too. NXT just embodies that in every way.