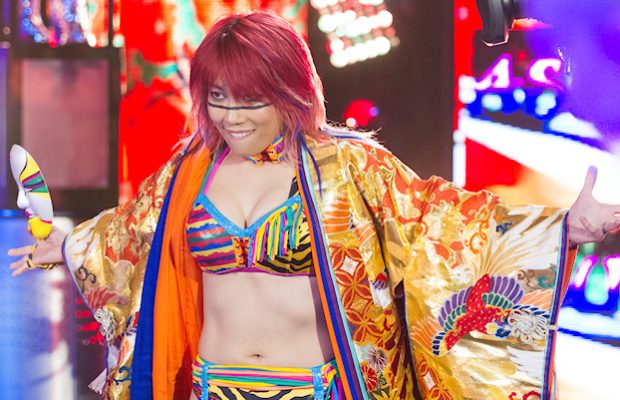 – Below is the latest promo for Asuka’s main roster debut at the October 22nd WWE TLC pay-per-view, featuring comments from other female Superstars on The Empress of Tomorrow:

– John Cena was in attendance for last night’s Dancing With The Stars episode as Nikki Bella waltzed through the “Guilty Pleasures Night” theme with partner Artem Chigvintsev. Brie Bella was also in attendance. Nikki will dance again next Monday night. WWE posted the following on last night’s show:

Nikki Bella is still in the running for the Mirror Ball Trophy on “Dancing with the Stars” after a surprise non-elimination week … and a visit from John Cena!

After surviving a double-elimination last week and dancing a non-traditional Viennese Waltz with professional partner Artem Chigvintsev on Monday’s Guilty Pleasures Night, the Bella Twin – and the rest of the celebrity dancers – escaped elimination on ABC’s reality hit.

“There’s no elimination this week as we focus on the guilty pleasures of our stars,” host Tom Bergeron revealed to the delight of the crowd and the stars, who started the show by paying tribute to those affected by the shooting in Las Vegas.

Before her dance, Nikki revealed her guilty pleasure is romance novels, such as “Fifty Shades of Grey.” She didn’t hold back during her seductive Viennese Waltz to “Love on the Brain” with Chigvintsev, while Brie Bella, sister-in-law Lauren Garcia and fiancé John Cena watched from the audience. When it was time for the judges’ scores, Cena joined his bride-to-be on the dance floor.

On the other hand, Judge Len Goodman said, “I wasn’t exactly transported to old Vienna with the elegance … It was a tad on the aggressive side.”

Nikki’s score improved to 21, but she still needs your votes to stay in the running for The Mirror Ball Trophy! Call to vote for Nikki toll-free at 1-800-868-3409. (Save this number, as it will be Nikki and Artem’s number to dial each week!) Note, only your first 11 votes count, and phonelines stay open for only 60 minutes after the finish of “Dancing with the Stars” in your local time zone. You can also vote online 11 times at dwtsvote.abc.go.com.

Stay tuned to WWE.com for complete coverage of Nikki on “Dancing with the Stars.”

– WWE posted this video of Triple H channeling his inner No Way Jose in the upcoming WWE 2K18 video game: