The Usos vs. The New Day, Luke Gallows and Karl Anderson Fallout, Fans on The Miz - PWPIX.net

The Usos vs. The New Day, Luke Gallows and Karl Anderson Fallout, Fans on The Miz 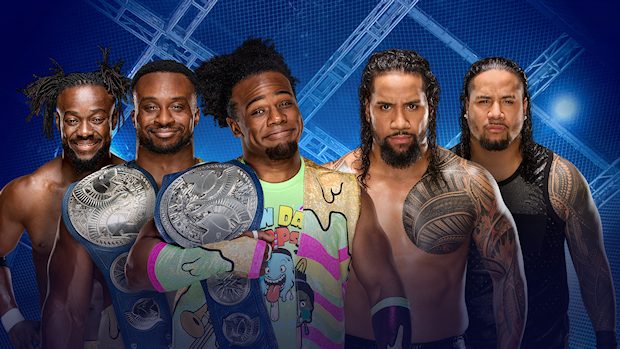 – Below is video of Luke Gallows and Karl Anderson talking to Mike Rome after their win over Matt Hardy and Jason Jordan on last night’s RAW. Anderson takes shot at Hardy and Jordan, and says The Club came to WWE to beat the living crap out of people & make a lot of money. Gallows gives Hardy and Jordan props but says they may be talented but they’re not much different than Rome because they have one thing in common… they’re all nerds.

– WWE has a new poll asking fans which mocking of The Shield by WWE Intercontinental Champion The Miz on last night’s RAW was the most disrespectful. As of this writing, 53% went with the fist bump while 29% voted for the triple powerbomb and the rest voted for the crowd entrance.

– Below is a new promo for The Usos vs. SmackDown Tag Team Champions The New Day at WWE Hell In a Cell, which will take place inside the Cell this coming Sunday.