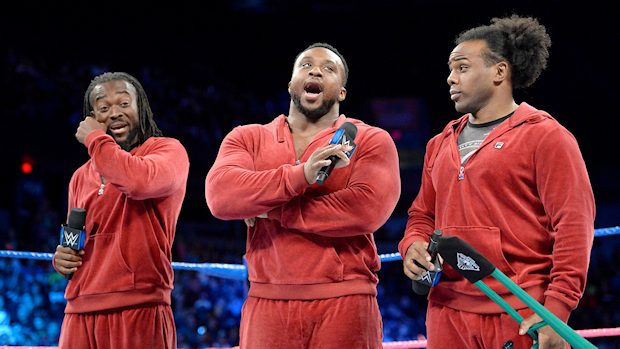 – Below is a new promo for Saturday’s WWE NXT “Takeover: WarGames” event from the Toyota Center in Houston, Texas. Remember to join us for live coverage on Saturday night, beginning with the Kickoff pre-show at 7pm EST.

Don't miss #NXTTakeOver: WarGames LIVE THIS SATURDAY at 8e/5p only on the award-winning @WWENetwork! pic.twitter.com/T8ZOEvTMcb

– Tonight’s Survivor Series go-home edition of WWE RAW saw The Shield issues a challenge to The New Day for Sunday’s pay-per-view in Houston. As seen below, Xavier Woods, Big E and Kofi Kingston have accepted the challenge.

Suffering succotash! We, The New Day, accept the Shield’s challenge at Survivor Series but request that all shock-absorbing body armor including (but not limited to) protective vests, shoulder pads, and heavy wool sweaters be disallowed for competitive use.

Every 26 secs a dog is domesticated in America. Survivor Series will be no different. Also Roman was gone because he got sick from eating his own poop. These dogs… #WelcomeBack

Unicorns vs. Hounds . One is magical and brings happiness to all. The other drinks out of the toilet and eats it's own excrement. We'll totally fight you, we just ask that you don't breathe in our general direction