Nia Jax Responds To Report That She Has Heat Over Hurting R-Truth - PWPIX.net 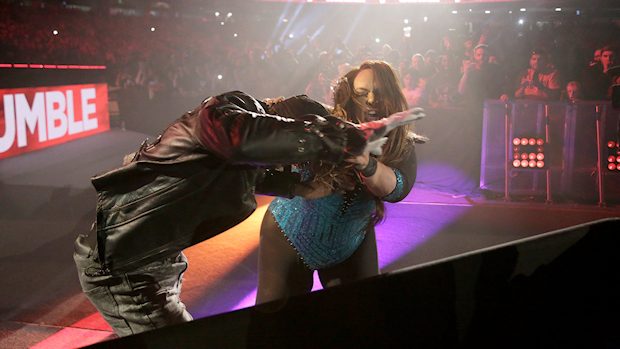 This past Sunday at the Royal Rumble, Nia Jax became the fourth woman to ever enter the Men’s Royal Rumble Match. After R-Truth came out for his entrance at No. 30, Nia attacked him before taking his spot in the match.

Jerry Lawler, who did color commentary for the match from ringside, said on the latest episode of his Dinner With The King podcast that R-Truth got upset with Jax for hurting him.

“This got real heat for real. She blasted poor R-Truth and knocked him face-first into that wall,” Lawler said. “He was hot, for real hot. They were having to hold him back there. She made it look good.”

Jax eliminated Mustafa Ali before being eliminated herself by Mysterio. A superkick from Dolph Ziggler, a 619 from Mysterio and an RKO from Randy Orton put her down, and then Mysterio knocked her out of the ring with a baseball slide from under the bottom rope.

Following the show, WWE posted this video of R-Truth looking for Jax backstage to demand an apology. Titus O’Neil, however, tries to calm him down.

Jax took to Twitter to respond to a report on Lawler’s comments: