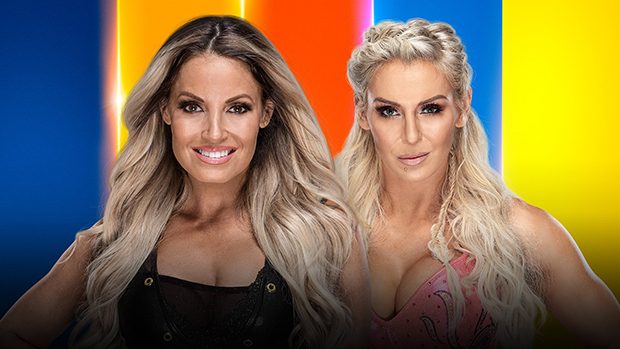 Trish Stratus and Charlotte Flair will go head-to-head at Summerslam.

An all Hall of Famers edition of “The King’s Court” went down last night on SmackDown LIVE as Jerry “The King” Lawler welcomed Trish Stratus to his hometown of Memphis, Tennessee. Stratus seemed thrilled to be back in front of the WWE Universe while also admitting that she was always itching to get back in the ring, but she also had to think about her responsibilities as a mother. The good vibes were quickly ruined when Flair interrupted, paying little mind to Trish’s accomplishments and her maternal status, suggesting that Trish was using her motherhood as an excuse before shockingly challenging Trish to a match at SummerSlam.

Stratus’ initial reply was silence, which drew the ire of “The Queen,” prompting Flair to tell the WWE Hall of Famer to get out of “her” ring and go back to changing diapers. The seven-time WWE Women’s Champion reminded Flair that there would be no trail for Charlotte to blaze if it wasn’t for the foundation Trish and her peers laid during “The Attitude Era.”

Trish then said “to be the woman, you have to beat the woman” and accepted Flair’s SummerSlam challenge.

“You know, I was literally at the cottage with my children, running on the beach with the sand between our toes and then I’m facing Charlotte Flair at SummerSlam in two weeks,” Stratus said. “I was saying to Jerry out there — it’s in my blood, it’s in my heart and soul, and I know that’s why I can pull this off.”

Braxton asked Stratus what means to return to the ring in her hometown of Toronto, Ontario, Canada.

“You know what, to have the Toronto love, The Six behind me, it’s incredible. And it feels a little full circle. I mean, I retired in Toronto. This match feels so important to me,” Stratus said.

“Charlotte said some stuff, I think she’s forgetting a lot of the work we did back in the day was for what the girls are doing now. We sit back and when we watch it, God do we wish we could be a part of it so much. So, it means a lot to just … sort of like, remind her who “The Queen of Queens” is.”

Braxton also asked Stratus how she plans on preparing for the match.

SummerSlam streams live on Sunday, August 11 at 7 ET/4 PT on the WWE Network.