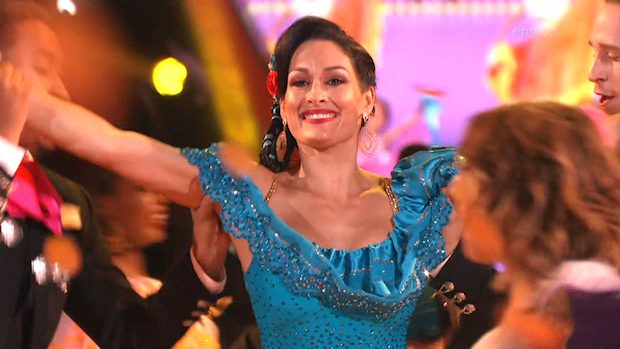 Nikki Bella and Artem Chigvintsev were eliminated from ABC’s Dancing With The Stars competition after their performance on this week’s Halloween-themed episode. She made it 7 weeks before being eliminated.

The elimination comes after Nikki’s season-high score from last week. She was voted off with Vanessa Lachey in a shocking double-elimination on Monday night.

WWE announced the following on the elimination:

Nikki Bella is eliminated on “Dancing with the Stars”

Nikki Bella danced her way into America’s hearts on Monday night, but the Mirror Ball Trophy won’t be hers on Season 25 of “Dancing with the Stars.”

While Nikki scored a season-high 46 points from the judges last week, that score combined with viewer votes still eliminated her from the competition in a shocking double-elimination, where the Superstar was voted out alongside Vanessa Lachey.

Nikki won the hearts of the judges and America on Monday’s Halloween Week episode, however, performing a spooky jive with professional partner Artem Chigvintsev. The dance earned her just a 24, but the audience gave her a standing ovation.

Can’t get enough of Nikki? Don’t miss her on Wednesday’s Season 7 premiere of E!’s Total Divas this week.

Below are a few photos and videos from this week’s competition:

Putting a spell on you this Halloween Eve, it’s #TeamSmackdown with a jittery jolting Jive! 🎃 pic.twitter.com/VqUTEvM9b6

Scaring up a thrilling and chilling Halloween night, the preternaturally talented cast of #DWTS!
❤️😱😱😱😱❤️ pic.twitter.com/mhFR3LrHfE