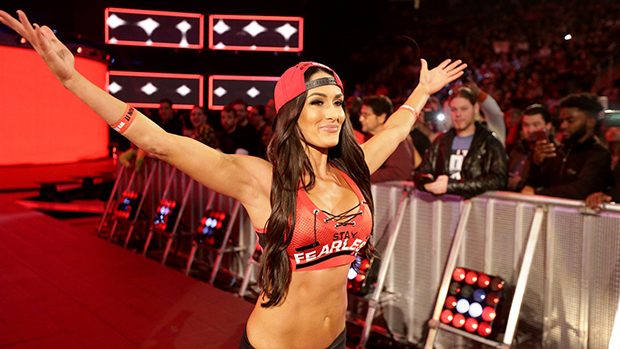 The possibility of Nikki Bella returning to the ring after announcing her retirement has been completely ruled out due to a brain cyst and herniated disc.

On the season finale of Total Bellas (air date March 24), Nikki said she was retiring from the ring after twin sister Brie Bella announced her retirement (on the March 10 episode of Total Bellas).

Nikki shared the news with her family. She cited her age — 35 — as a factor in her decision to quit.

“The [European] tour was good but I feel like I’m too old for the travel, the travel was really rough,” Nikki said. “I was like, why am I doing this? I don’t feel good. The girls are doing amazing things over there. I really am ready to hang up the jersey, I can say it fully.”

Brie chimed in to respond to Nikki’s retirement announcement, saying, “Well, you can hang ’em right next to mine.”

On the premiere episode of the Total Bellas podcast on March 27, Brie said that she and Nikki would return to the ring for the opportunity to capture the WWE Women’s Tag Team Championship.

“Nicole and I did tell everyone that we are stepping away from the ring, which is true, we are. But we also said that before the WWE Women’s Tag Team titles came into place,” Brie said.

“This is the thing, for years we were begging for the Women’s Tag Team titles. Begging. We never thought it could truly be a reality. The fact that it is now, makes it extremely tempting for us to go back and fight for them because we’re really the longest reigning, most authentic tag team.”

Upon further evaluation, doctors told Nikki that she would have to stay on the sidelines. During an appearance on The Tonight Show with Jimmy Fallon on Wednesday, Nikki said she’s permanently retired from in-ring competition

Nikki, who was joined by Brie, said she wanted to return to action to pursue the Women’s Tag Team Championship with her sister but was not cleared to do so because of injury complications.

“I really wanted to go back and fight for the [Women’s] tag titles,” Nikki said. “You know, I’ve always had my neck issues. And after neck surgery, like, it hasn’t been okay.

“I felt like I needed to get that check-up before we went back for the tag titles. And then it came back — I herniated the disc above where I had surgery. I have all this inflammation around the metal, and then I have a cyst on my brain. So they were like, ‘You’re done, no more, you’re out.’ So, I didn’t get a choice.”

Nikki underwent neck surgery in January 2016, which kept her out of action until August of that year. She returned to wrestle a light schedule, but has not competed in a match since losing to Ronda Rousey on November 9 at a WWE live event in Bologna, Italy. Her last televised match took place on October 28 at WWE Evolution in a loss to Rousey.