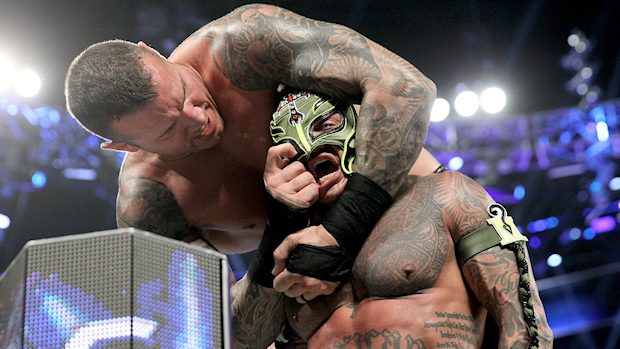 – Randy Orton’s quest to get rid of WWE’s heroes continued last Tuesday as he faced Rey Mysterio in their first one-on-one match on SmackDown LIVE in more than 12 years.

During one point in the match, Orton attempted to rip off Mysterio’s mask but Rey fired back with his dynamic offense. In the pivotal moment of the match, Orton struck with an RKO on the outside when Rey was attempting his signature head-first slide. Orton then dragged Rey’s lifeless body into the ring and connected with another RKO to pick up the win. Clearly not satisfied with merely claiming the victory, “The Viper” grabbed a steel chair, placed it around Rey’s neck and ran his foe into the ring post. Orton then stole Rey’s mask and held it in the air as medical personnel tended to the clearly hurt Mysterio.

Ahead of SmackDown LIVE tomorrow night in Minneapolis, Minnesota, Orton revealed on Instagram that he’s traveling with Mysterio’s mask.

Packing for #smackdownlive hmm let’s see I miss anything

– Watch an exclusive sneak peek of the brand new season of The Edge and Christian Show, streaming tonight after Raw on WWE Network.

– Despite nursing several ailments, AJ Styles talks about his desire to compete at the highest level on WWE 365: AJ Styles, available now on demand on WWE Network.