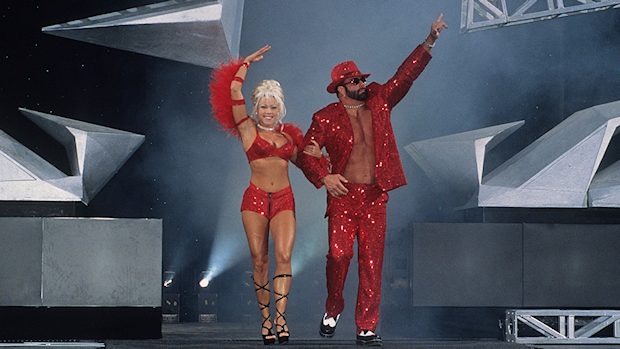 At the end of 1999, WCW wrestler Vampiro formed an alliance with punk rock band Misfits. But Jerry Only and crew didn’t just walk Vampiro down the ring, or simply give him an entrance theme song. In fact, the band (which at the time also consisted of singer Michale Graves, guitarist Doyle Wolfgang Von Frankenstein, and drummer Dr. Chud) stood by Vampiro for his matches and promos, often helping him attack his opponents in and out of the ring. Only even wrestled in a steel cage match against “Dr. Death” Steve Williams.

It was during this stint that Wolfgang met blonde bombshell Gorgeous George, who he ended up marrying before divorcing in 2013. However, when Wolfgang met George, she was dating the legendary Randy Savage and working as his valet in WCW. In a recent interview discussing the group’s WCW stint, Graves talked about his and Wolfgang Von Frankenstein’s hostile encounter with Savage backstage at a show over George.

Well Ian (Vampiro) once told me that you (Misfits) were actually too “over” aka popular with the fans. And that the creative management in WCW did not like the fact that you were becoming more popular than some of their most popular acts, and that same management may have actually tried to sabotage your momentum there.

“Yeah man. I really tried to stay out of the politics of everything. There was so much drama going on within the band itself at the time. I just knew that we had so much talent and so much creativity. The fire in such a young man that burned in me, and the things that I wanted to do. It was very frustrating that it was such a big boy world with lots of money and power. You know. And I was just a creative guy. So I saw all of the struggles and I was just really kinda f–kin sad that it all got squashed over stupid s–t. And if we had people around us that could stand back and be objective and go ‘these guys are creative, they’re strong, they’re talented, and they can make us a lot of money’. We were on the verge. We were really on the verge. We had people like Rob Zombie calling us like ‘Hey man, can I direct your video’. And I saw all this happening. And again, I was a small fish. I was just a young guy in my early 20’s. So I just did my best to keep myself together and pray to god that we could keep the bus together…and we couldn’t man. We just flew apart.”

Vampiro mentioned something that I was wondering if you could speak on. Something about you and Doyle (Von Frankenstein) being caught in Macho Man Randy Savage’s wrath at one point, supposedly over his then valet/girlfriend Gorgeous George?

“Yeah, yes. It was terrible. There was a time at one point, when me and Matt, the two smallest guys on the Misfits/GWAR tour, got cornered backstage by Randy Macho Man Savage. A very angry, drunk, Macho Man Randy Savage.”

How’d you get out alive, that guy was intense?!?

“I just stayed calm. I called him Mr. Man. I swear to god. I said Mr. Man, listen… and I just hoped for the best.”

I recently met Bill Apter, the guy that was the senior Editor for all the big wrestling magazines back in the day, and he said that he once got on Randy Savage’s bad side as well. He felt like his life was in danger and that he just couldn’t believe the intensity of the guy.

“Yeah, ya know. I can’t really speak ill of the dead. I’ve gotta be honest with you. With my run-in with Randy Macho Man Savage, that man had every right to be pissed off the way that he was. And every right to be as scary as he was. And if he wanted to, he coulda choked the s–t outta me. He was just awesome you know. He was an intense guy! ‘Stay calm son’, is all I could think to myself.”

Much more is contained in the interview, including Graves revealing how the WCW deal happened, their relationship with Vampiro, working with David Flair and more. To read the full interview, click here.