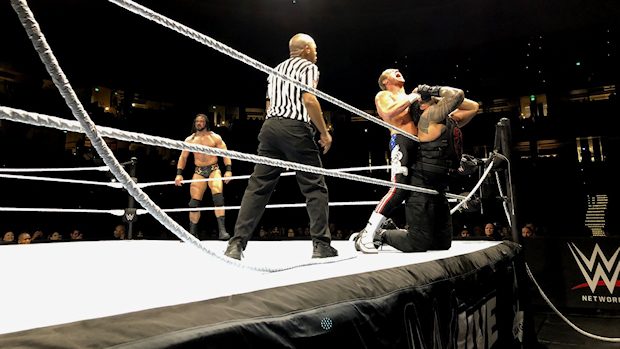 Part of being a WWE Superstar is the ability to adapt on the fly when something totally unforeseen threatens to derail a match, as four competitors learned during last night’s live event in Anaheim, California.

During the night’s main event — a tag team match pitting Seth Rollins and Roman Reigns against Intercontinental Champion Dolph Ziggler and Drew McIntyre — the top rope snapped in half when McIntyre was sent tumbling out of the ring to the floor.

Here are videos of the moment the rope breaks.

Rather let it stop the action, the four WWE Superstars continued unhindered, finding creative ways to incorporate the broken rope into the action, and, in some cases, even having a little fun with the situation.

If the top rope breaks, is this a tope suicida or a top con hilo?! #WWEAnaheim @WWERollins @WWE pic.twitter.com/Fan8RrJlj6

According to a fan in attendance, Rollins pinned Ziggler after nailing him with The Stomp. The top rope came undone about three minutes in when Rollins threw McIntyre outside. They continued working the match with all the ropes loose, not being able to do as many high spots. There was a lot of stalling due to having to improvise so much.

After the match, Rollins spun the rope around as he celebrated.