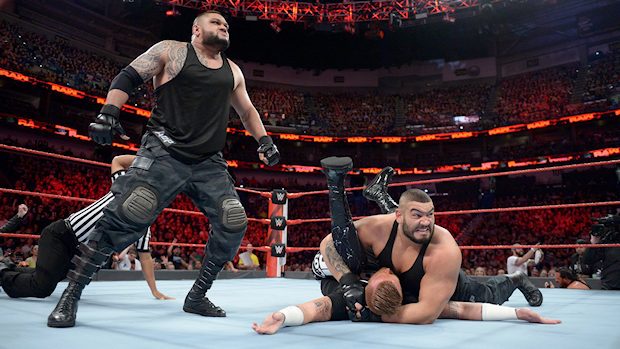 – The Authors of Pain are back … on WWE Main Event.

Before Raw went live on the air last Monday night from the Van Andel Arena in Grand Rapids, Michigan, Akam and Rezar worked their first television match in over a month. The intimidating duo faced Breezango — Tyler Breeze and Fandango — in a match that aired on last week’s episode of WWE Main Event (the weekly program is uploaded to Hulu on Thursday in the United States, and airs on television internationally).

This was as close to a squash as they come on WWE television these days. Breeze got in a total of two dropkicks and a superkick and Fandango managed some knife-edge chops, but that was about it.

The Authors of Pain used power moves and postured a lot, making the match longer than it should have been. While the match lasted less than three minutes, it went through a commercial break. When the action returned, Breeze hit the Beauty Shot on Akam for two. Rezar tagged in, elbowed Fandango off the apron, and they hit the Last Chapter on Breeze for the win.

Here are highlights from the match.

It’s worth noting that Akam and Rezar seemed over with the crowd as some of their moves drew a positive reaction.

Prior to the match, The Authors of Pain had not appeared on television since May 17, where they beat Titus Worldwide on WWE Main Event. Akam and Rezar last appeared on Raw on April 30, beating two local competitors. Click here for a story on why they haven’t appeared on Raw for the past several weeks.

– In this interview with Mike Rome, new Intercontinental Champion Dolph Ziggler exudes confidence before his title rematch against Seth Rollins tonight on Raw from the Valley View Casino Center in San Diego, California.

– Any WWE Superstar can lose his or her cool in the heat of the moment. Count down 10 infamous instances of WWE Superstars snapping and taking out their rage on an unsuspecting foe.