Roman Reigns On WrestleMania Match With The Undertaker Not Living Up To His Expectations - PWPIX.net 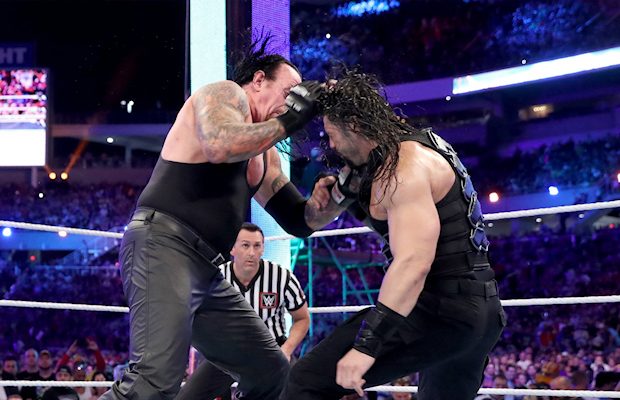 In front of 75,245 fans at the Orlando Citrus Bowl, Roman Reigns overcome The Undertaker in a No Holds Barred Match at WrestleMania 33 to prove that WWE is his yard now. During a conversation with CBS Sports’ In This Corner podcast, “The Big Dog” was asked whether the match lived up to his own personal expectations.

What also added to the pressure of the bout was The Undertaker being at the end of his career. At the same time, Reigns felt it was a great learning experience to have a lengthy bout with the wrestling legend.

“For me, what made it so hard was how heavy it was,” Reigns said. “You know, if I wrestled The Undertaker 20 years ago at the beginning or the middle of his career, probably not. But the positioning I found myself in, it just felt really heavy and so much more emotional than I was ready for it to be, so I think that was the hardest thing … but, you know, the coolest thing because I think that just shows the gravity of the situation, the responsibility of the placement [on the card] and just who I was sharing the ring with. And that’s just how special he is.

“I just feel like maybe I wasn’t good enough or maybe it could have been better on my behalf, but I always hold The Undertaker in so high in that regard that I just feel like maybe I could have done better. But I enjoyed it. I really learned a huge amount in the ring with him; you know, to being in the ring with him for one singles match and to have it be at that level, to be able to pick something up in just 30-40 minutes from another performer — it just goes to show how good he is.”