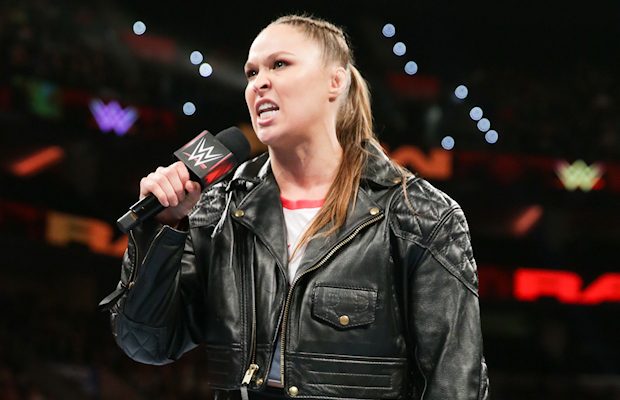 The Bella Twins made their move on Raw on October 8 by betraying Ronda Rousey, which led to a Raw Women’s Championship Match for Nikki Bella at WWE Evolution. “The Baddest Woman on the Planet” came to Raw this week looking for an explanation but didn’t like the one she got.

According to the Bellas, their attack of Rousey came down to reclaiming the respect they felt the champion had taken from them; to Nikki and Brie, Ronda jumped the line and was now taking credit for an evolution they started in the Divas division and bolstered with the outreach of their reality shows. Ronda admitted that she had tried to be respectful of the Bellas’ seniority, regardless of her personal feelings on the Divas Era, and initially felt that maybe they could join forces to spearhead the evolution together. After last week, she came to a different conclusion: All the twins wanted was a camera.

The insults got pretty invasive after that — so much so that Rousey successfully goaded The Bellas down from the ramp, albeit surrounded by a team of private security guards. Ronda made quick work of the hired hands and The Bellas headed backstage.

Dave Meltzer noted in the Wrestling Observer Newsletter that Rousey’s promo is based on how she really feels about women who get by on their looks. Rousey referring to the Bellas as “do nothing Bellas” is based on a phrase she coined during her UFC career — “do nothing bitches.” Rousey said a few years ago that it’s the term for the kind of woman her mother raised her to not be.

With assistance from Paul Heyman, who has produced Rousey’s promos in recent weeks, she personally wrote most of her promo. She wanted to call the Bellas “do nothing bitches” but creative had her change it to “do nothing Bellas.”

On Rousey’s promo, Meltzer wrote, “The highlight was a great promo battle with Rousey and the Bellas, designed to get Rousey over and make the Bellas into smug, strong heels. It was shockingly well scripted and Rousey’s delivery was far beyond what anyone could have hoped for in such a long segment. It was, by far, her best verbal performance ever. She actually made it seem legit.

“The interesting note is that Rousey personally wrote most of her promo and used her own words. Rousey’s segments of late have been produced by Paul Heyman because she’s most comfortable working with him and he’s got the best knowledge of both her character and her career. Heyman gave her instructions, the key spots to hit as far as the line about Cena’s bedroom, leeching off their men, as well as the Bellas key lines of putting over how they were the real people who started the revolution and putting over the divas title record with the idea that the divas era is regarded negatively by the fan base as a bad thing for women and they’d be pushing it like a good thing. Of course, Stratus and Lita came from that era, but they are legends now.

“Some of the words or awkward phrases people didn’t understand were actually her words and what she would say. Brie talking a lot was with the idea of her talking and hitting the points with Nikki acting smug like she was the hottest girl in the room type of reaction. Even though Rousey and Nikki were friendly long before Rousey got into wrestling, they channeled Rousey’s real life feelings about hot women who do nothing but get by on their looks, the “Do Nothing Bitch” catch phrase she used a few years ago, and used that for her to get passion in this promo.

“All the stuff with Cena was laid out for them as far as the bullet points went. Rousey wrote out the Do Nothing Bitches line for the promo but the company changed it to “Do Nothing Bellas,” same DNB. The reason the announcers didn’t explain the DNB significance to the live audience is because they either didn’t know it was coming or didn’t know her Do Nothing Bitches catch phrase. They didn’t want her to use the word bitches, at least this week.

“The idea was that Nikki was not the opponent the fans at first wanted to see her headline a PPV with, so they had to go in the direction of the women as sex objects vs. women as athletes, which is something Rousey is passionate about, to make it a personal issue program, and that’s why the segment was so shockingly strong by WWE standards. Plus, you had the Heyman fingerprints in some of the strong direct language.”

Rousey was heavily praised backstage for her promo. Creative felt Ronda’s delivery was great and she made her match against Nikki at Evolution seem very important.