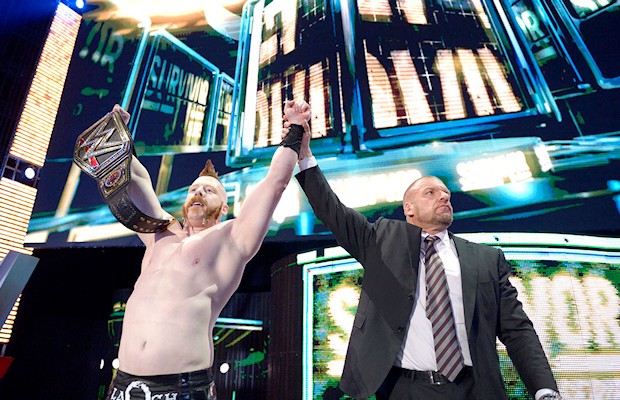 * In regards to pressure and scrutiny on this reign due to top WWE stars being out, Sheamus said he’s been in this position before and faced a lot of scrutiny in the past, as a heel and babyface. He said he’s been ready to go for a long time, since before winning Money In the Bank. He feels like the last few months he’s been waiting and ready to go. He said there’s always pressure and he looks forward to that. He’s 6 years into his WWE career, at a different point in his career and is a different person. He knows what he’s doing now. He knows a lot of top WWE stars are out right now and knows Seth Rollins will be coming back better than ever. Sheamus says he’s not going to let the opportunity pass him by and will give it everything he can. He calls it an opportunity of a lifetime and says he’s never felt better or more comfortable in his own skin

* He was asked how he prepared for the weekend and asked if they ever thought there might not be a show due to the reports of a potential Islamic State terror attack. He says WWE took the threat very seriously and the talents were kept updated on what was going on. He talks about how the authorities handled everything. He goes into all pay-per-views the same and didn’t treat Survivor Series any different. He says last night was so surreal for him and while he’s been in this position before, this one feels more special. Sheamus was asked if the Irish are taking over WWE now that he has gold, Finn Balor is the NXT Champion and Becky Lynch is on the main roster. Sheamus praises Finn for their matches on the UK tour and calls him he flagship Superstar of NXT, a future WWE World Heavyweight Champion

* Sheamus was asked how he celebrated the win last night – a few Monster Milks and a 4.5 hour drive to Nashville. He sat in the locker room for about an hour by himself last night and took it all in before getting in the car to drive to Nashville. He says the era of the Celtic Warrior begins on RAW tonight and he couldn’t be happier. He was asked about working with Roman Reigns and possibly Brock Lesnar. He says he’d love that and has been ready to go for a long time. He talks about the WrestleMania match with Daniel Bryan and how Bryan went on to do big things. He was so proud of Bryan for winning the title at WrestleMania. Sheamus says but he knew he needed to switch things up when he returned the last time. He reiterates that he won’t let this opportunity pass him by. He names Reigns, Dean Ambrose and Kevin Owens, saying there’s a lot of people he’s looking forward to facing

* When asked about backlash for Reigns, Sheamus says he’s dealt with it pretty well. He says Reigns is passionate about what he does, he’s a great athlete and a great Superstar, and a great poster-boy for WWE. Sheamus talks about how he tried to get close to the crowd before and realized no matter what he did, the WWE Universe had made up their mind about him. He says Reigns should stick to his guns about who he is and not try and be anything else. He says Reigns will be fine if he believes in himself and what he’s doing

* Sheamus was asked if he started to fear like he would be the rare guy that didn’t get a chance to cash-in Money In the Bank successfully. He said he’d be lying if that didn’t go through his mind. He says we’re all human and when something’s not going your way, sometimes you can doubt things. He says anytime he goes into the ring, he’s passionate about what he does and leaves nothing left. He knows the fans can feel his intensity. He makes anyone earn their stripes in the ring, including himself. He did have fear about how his cash-in would go but he’s always believed in himself and believed he would walk away as champion. He was asked if he hopes he can continue a storyline relationship with King Barrett because they were recently tagging. He says there was a real friendship there and they had a lot of fun. He says his priorities are with the title now but he’s open to teaming or siding with Barrett also. He mentions the WWE Tag Team Titles and said he had a lot of fun with Barrett

* He was asked about social media feedback and said if you sit and analyze every comment, you’d go insane. He laughed at a lot of the comments he woke up to this morning. He says he is his biggest critic. He names Finlay, Triple H and Arn Anderson as his mentors he talks to. He says there will always be a lot of negative and a lot of positive, no matter what, and you embrace it all. He knows he’s doing his job, and doing it well, if he gets under people’s skin and antagonizes them. He was asked about a Brock Lesnar match again. He calls it a dream match. He also talks about he would want to face The Undertake and praises Taker for how he can still go. He would love a match with Lesnar and has said it for years. He’d love to take on The Beast now that he’s champion. He says Paul Heyman knows how passionate he is about that match-up

* Sheamus was asked about what he’s going to do to justify Triple H’s faith in him and asked about Triple H’s role in Sheamus’ career. He says we can tune into RAW to see how he will justify the decision. From day one when he came into WWE, William Regal took him under his wing and introduced him to Triple H, who Regal also helped early in his career. When Sheamus went to RAW, Triple H watched all of his matches and would give him feedback, mentoring him. They were helping him avoid mistakes that they made and most others make. He says Triple H saw something in him and he wasn’t going to turn down advice from a multi-world champion that has achieved as much as Triple H has. He says Triple H was always there for him and helped him out big time. He says last night was a great moment and fitting with Triple H by his side. It brought back a lot of great memories and will create a lot more