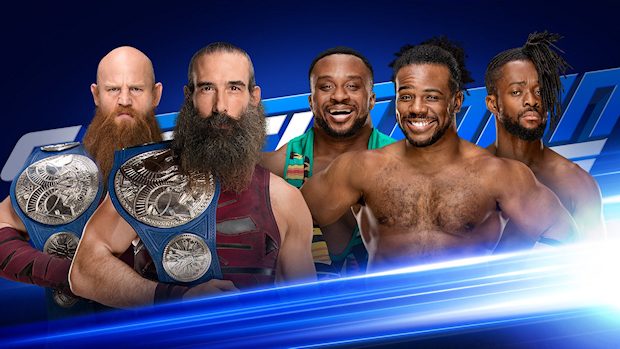 Two matches have been announced for tonight’s post-SummerSlam edition of SmackDown LIVE from the Barclays Center in Brooklyn, New York.

After Sunday’s controversial SmackDown Tag Team Championship Match, The Bludgeon Brothers will put the titles on the line against The New Day in a No Disqualification Match. Rowan attacked Big E and Xavier Woods with a mallet, which resulted in a disqualification victory for The New Day.

There’s a strong possibility that this match doesn’t go down since it was reported last night that Rowan suffered an injury to his arm during the match. He did not work last night’s WWE live event in Atlantic City, New Jersey.

Plus, Jeff Hardy will finally be able to get his hands on Randy Orton when the two square off in the night’s very first match.

Hardy and Orton have been feuding since Orton returned at WWE Extreme Rules last month, with Orton attacking Hardy multiple times since then. Orton appeared after Hardy lost to United States Champion Shinsuke Nakamura at SummerSlam but didn’t attack him this time. During a WWE.com interview with Kayla Braxton, Orton explained that he will deal with Hardy “on my own terms.”

An “exclusive interview” with AJ Styles, who got disqualified in his WWE Championship Match against Samoa Joe at SummerSlam when Joe taunted his family, is also set for tonight. Becky Lynch will also explain why she attacked Charlotte Flair after Flair beat her and Carmella in a Triple Threat Match to capture the SmackDown Women’s Championship.

A #NoDQ championship rematch, a highly-anticipated battle, an exclusive interview, AND an explanation…

It will ALL go down on #SDLive TOMORROW NIGHT at 8/7c on @USA_Network! pic.twitter.com/gUMUJCwPwa