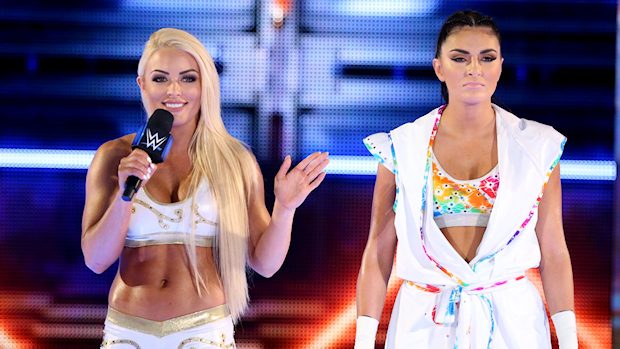 – Becky Lynch, Charlotte Flair, Mandy Rose and Sonya Deville are all being filmed tonight in Florida for the WWE Network series, WWE Ride Along.

Lynch and Flair are in one car, with Rose and Deville in the other.

All four SmackDown LIVE Superstars posted photos and videos of their road trip on Instagram.

– Ahead of SummerSlam 2018 on August 19, WWE posted this 60-second highlight video looking back at SummerSlam 2003.

– NXT Superstar Tino Sabbatelli was among those in attendance at the 2018 Pro Football Hall of Fame induction ceremony in Canton, Ohio on Saturday night.

What an incredible night.. Thankful,excited and honored to share this Moment with my boy @raylewis.. ONE OF THE GREATEST TO EVER DO IT, ON AND OFF THE FIELD.. Congratulations to the class of 2018 HOF..

Prior to joining WWE in 2014, Sabbatelli – real name Sabatino Piscitelli — played five years in the NFL. He was originally drafted by the Tampa Bay Buccaneers in the second round (64th overall) of the 2007 NFL Draft. He also played for the Cleveland Browns and Kansas City Chiefs. He played collegiately at Oregon State.