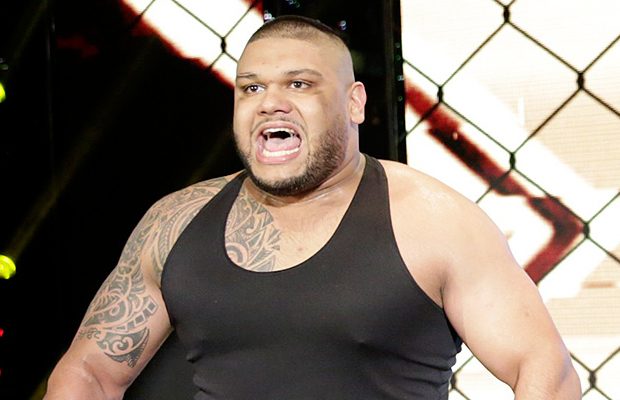 Just who is Sunny Dhinsa? Here are seven things you should know about this mysterious man who alongside Gzim Selmani, has put the wrestlers of WWE NXT on notice.

At NXT TakeOver: The End…, a pair of monsters clad in camouflage brutally assaulted American Alpha while WWE Hall of Famer Paul Ellering looked on.

Jason Jordan and Chad Gable barely had any time to let it set in that they had lost the NXT Tag Team Championship to Scott Dawson and Dash Wilder when they were bulldozed by the team of Sunny Dhinsa and Gzim Selmanu. Fans was stunned by the carnage, and even more shocked when Ellering commanded the devastating duo to the backstage area.

So who is Sunny Dhinsa? Here are seven things WWE NXT fans should know about this mysterious individual that has put everyone on notice. 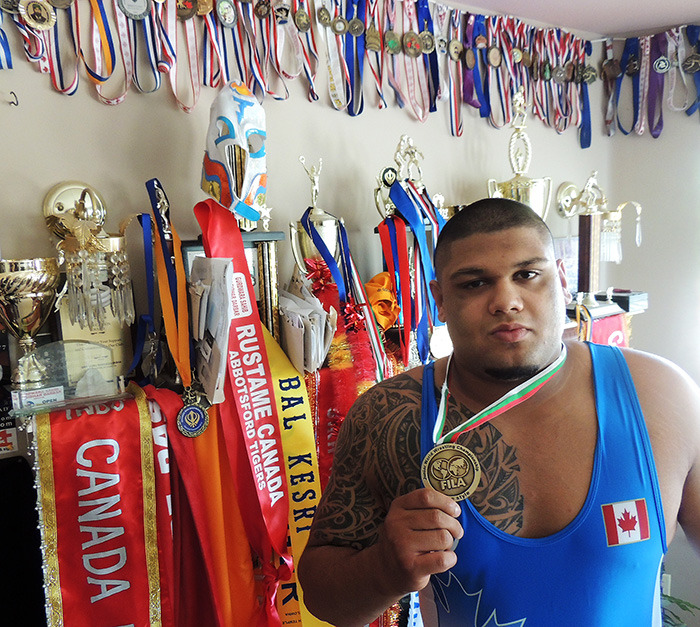 Sunny Dhinsa was considered a phenom in amateur wrestling while growing up in Abbotsford, British Columbia, Canada.

A 2013 profile piece on Dhinsa in the Abbotsford News said, “The living room of the Dhinsa family home doubles as a wrestling museum, and an impressive one at that. Hundreds of medals won by Sunny Dhinsa, some dating back to when he was five years old, hang on a rope which runs along the wall, just below the ceiling. On the mantle and in front of the fireplace, banners, sashes, posters and trophies are displayed.”

According to Simon Fraser University, where Dhinsa attended college, he finished in second place at the 2011 Pan American Games in Guadalajara, Mexico and was the Canadian Champion in 2012. In 2013, he wrestled Korey Jarvis in the Gold Medal Match of the Senior National Championships. Jarvis will be competing at the 2016 Summer Olympics in Rio de Janeiro, Brazil.

When Dhinsa was 18-years-old, he nearly qualified for the 2012 Summer Olympics in London, United Kingdom. In March 2012 at the Pan American Olympic qualifying tournament in Orlando, Florida, Dhinsa failed to finish in the top two in the heavyweight division (120 kg) to guarantee a spot in the Greco-Roman variety of the sport.

Dhinsa ran into trouble even before he stepped on to the mat on that fateful day. In a random drawing to setup the eight-man bracket, he drew American Dremiel Byers, who wrestled in the 2008 Summer Olympics. Dhinsa was beaten by Byers in two hard-fought rounds, 1-0 and 3-0.

With his Olympic dreams dashed, the Canadian grappler subsequently lost to Ramon Garcia of the Dominican Republic to finish in fifth place. Dhinsa believes he would have qualified for the event had he drawn a wrestler other than Byers.

“It’s kind of stupid, because everything depends on the draw, depends on your luck,” Dhinsa said following the loss. “I knew the American was good, because he’s a full-time Greco guy.”

He added, “I’m not upset with my performance — I did what I could. I’m upset with the draw. But I can’t do anything about it.”

Immediately following the loss, Dhinsa set his sights on wrestling at the 2016 Summer Olympics. It would not come to fruition since he left the sport in 2014 to join WWE.

His Tag Team Partner Has A Background In Mixed Martial Arts 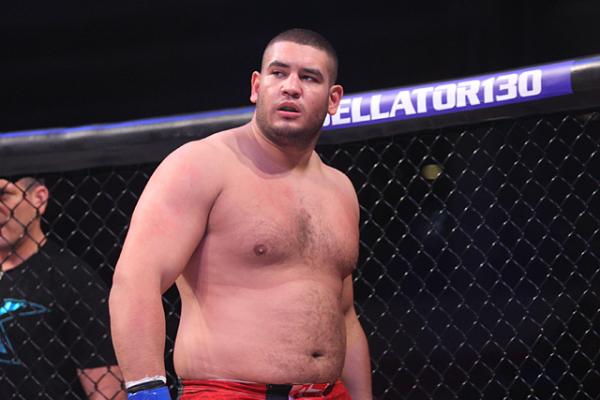 The other half of The Authors of Pain, Gzim Selmani, comes from the world of mixed martial arts.

An ethnic Kosovo Albanian who grew up in the Netherlands, Selmani began practicing judo when he was a toddler, took up kickboxing at 12-years-old, and started training for mixed martial arts when he was 15 alongside his brother Egzon. The brothers eventually dropped out of school to turn their focus to MMA.

In 2012, Selmani joined Golden Glory, a mixed martial arts, kickboxing, and Muay Thai camp and management team based out of the Netherlands. After taking part in amateur mixed martial arts Shooto competitions all across the Netherlands, Selmani had his first professional fight on November 24, 2012 in Brasov, Romania. He came out on top in his debut match, beating Anatoli Ciumac via TKO.

Selmani scored an impressive win over Oli Thompson, who once held the title of Britain’s Strongest Man, on April 5, 2014 in London, United Kingdom. Selmani beat Thompson in 18 seconds via technical submission (guillotine) in the main event of BAMMA 15.

Selmani had the biggest match of his career at Bellator 130 on October 24, 2014. The event, which emanated from the Kansas Star Arena in Mulvane, Kansas, aired live in prime time on Spike TV. Unfortunately for Selmani, he came out on the losing end as he was beaten by Daniel Gallemore via TKO. It was the final match of his MMA career. 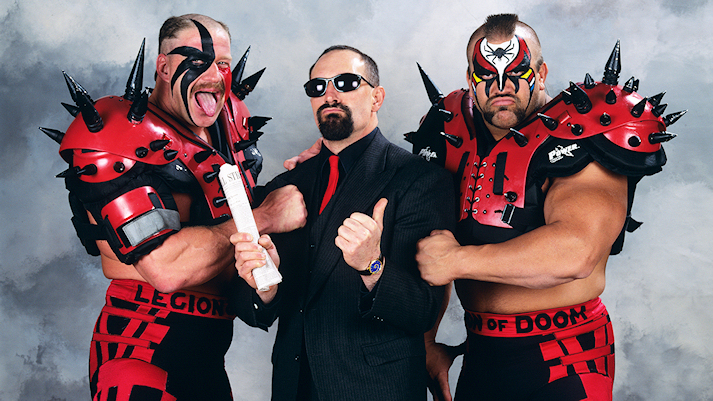 Paul Ellering is best remembered by wrestling fans all across the globe as the loud-mouthed manager of arguably the most dominant tag team of all-time, The Road Warriors.

Ellering was introduced to WWE fans in 1992 at WrestleMania VIII when he reunited with Hawk and Animal. Now known as The Legion of Doom, they were as dominant as always — even if Ellering brought a ventriloquist dummy named Rocco to ringside to assist him with his decision making. This version of the group was short-lived as the group parted ways with the organization by the fall.

Ellering’s popularity with fans sank in 1998 when he returned to the sports-entertainment organization to side with LOD’s chief rivals, The Disciples of Apocalypse (also known as DOA). On July 26, 1998 at Fully Loaded, Ellering successfully led Skull and 8-Ball (also known as The Harris Brothers) to victory over Hawk and Animal. A few months later, however, LOD got their revenge when they teamed up with Droz to defeat DOA and Ellering.

Ellering’s two stints in WWE failed to match the incredible success he achieved as the longtime friend and manager of the explosive duo. His unmatched intellect and guidance of The Road Warriors during their rise to global domination in the 1980s was recognized in 2011 on the night before WrestleMania XXVII. The Road Warriors accepted their final accolade in an emotional induction ceremony, taking their well-deserved place in the WWE Hall of Fame.

Sunny Dhinsa’s Arrival To WWE Was Considered A Surprise 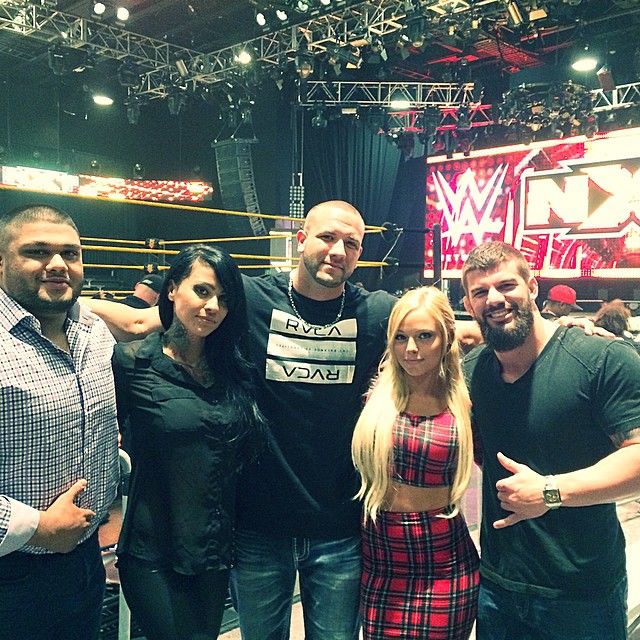 Sunny Dhinsa’s arrival to WWE in 2014 was considered a surprise since he had his sights set on competing in the 2016 Summer Olympics in Rio de Janeiro, Brazil before becoming a professional wrestler.

WWE Hall of Famer Gerald Brisco, who is also a talent scout for the sports-entertainment organization, said in an interview with SLAM! Wrestling in 2013, “[WWE] scouted two young amateur wrestlers and brought them for a tryout recently, Sunny Dhinsa from Canada and Tyrell Fortune from the U.S. They both want to become WWE Superstars, but now they might want to stick around to perform at the Olympics, which is a great thing as they will be known internationally before coming to the WWE.”

Dhinsa was offered a contract after impressing WWE executives at a tryout in the summer of 2014. He was among a group of athletes with no prior experience in professional wrestling to begin training at WWE’s training facility in Orlando, Florida, the Performance Center, in October of that year. The other recruits in his class were amateur wrestler Josh Woods, bodybuilder Dustin Mueller, and models Gionna Daddio and Zahra Schreiber.

“A new group of wrestlers signed from a camp over the summer, who started out this week in Orlando, are headed by Sunny Dhinsa, who is something of a surprise,” Dave Meltzer stated in the November 3, 2014 issue of the Wrestling Observer Newsletter. “Dhinsa was the 2011, 2012 and 2013 Canadian national freestyle wrestling champion in the 264 pound weight class and placed third in the 20-and-under world championships last year. Dhinsa was attending Simon Fraser College in British Columbia as a freshman last year. As a teenager, he took second at the 2011 Pan American games but failed to qualify for Canada’s Olympic team as an 18-year-old heavyweight. He was training for the 2016 Olympics, and really one would think his peak would be 2020. But he had said that he wanted to train for 2016 and go to WWE that year. But after an offer by WWE, he decided to give up amateur wrestling. Gerald Brisco had scouted him a few years back and had kept in touch with him ever since.”

He continued, “Theres a fine line here. It’s the guy’s choice, but I know amateur wrestling officials, and they tend not to like pro wrestling to begin with. Amateur wrestling people don’t even like when guys like Ben Askren leave for MMA because of the feeling they are taking guys who still have medal potential out of the sport. Brisco generally works with college officials and doesn’t sign people until their eligibility is up. But this was the exception. Except for Dhinsa, everyone else were all signed with an emphasis on their look.”

Sunny Dhinsa Was Originally A Part Of A Three-Man Group 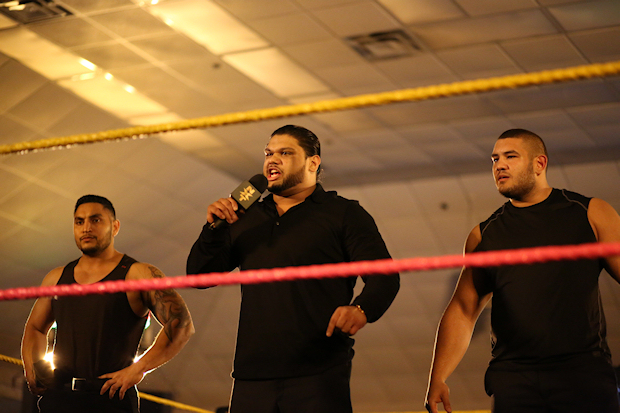 First impressions are everything so WWE will often experiment wrestlers at small shows in Florida before featuring him or her on television. The Authors of Pain are no exception as Sunny Dhinsa and Gzim Selmani were originally put together in a three-man group.

During their first appearance together in NXT — on October 29, 2015 at a non-televised event in Citrus Springs, Florida — they were joined by fellow wrestler Lovepreet Sangha, a former World Kabbadi League Champion from India who joined WWE earlier in the year.

Dressed in black, the trio cut a heel promo in the middle of the squared circle. Labeling themselves a tribe, Dhinsa, Selmani and Sangha told the audience to bow down and show them the respect they deserve. The act, however, was a one-time experiment as they never appeared in this manner again. 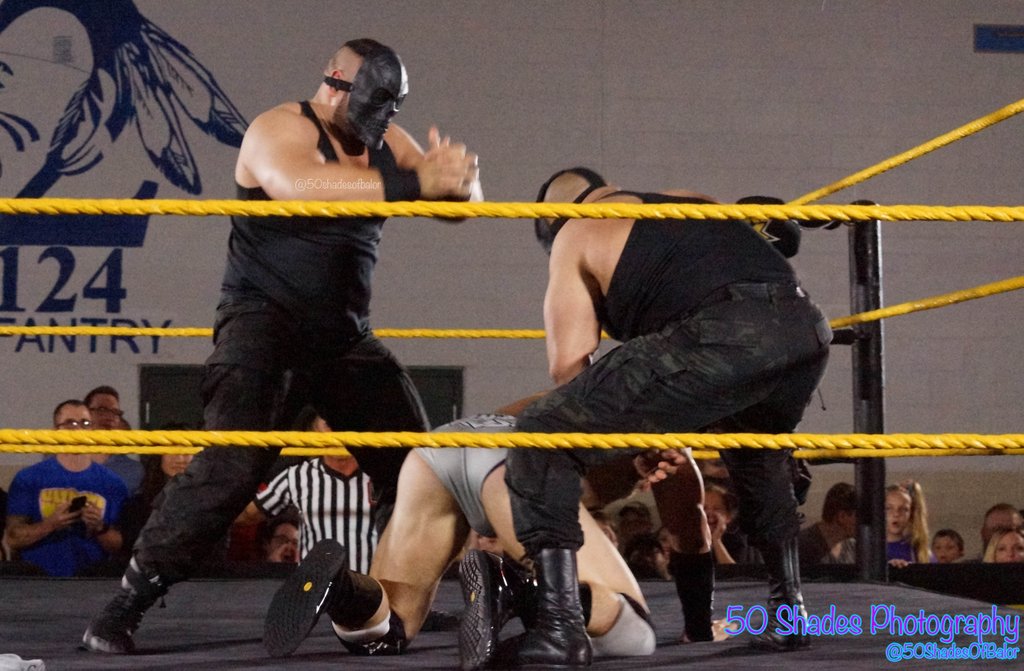 Prior to making their television debut on June 8, 2016 at NXT TakeOver: The End…, The Authors of Pain were given a test run at non-televised NXT live events in Florida. Sunny Dhinsa and Gzim Selmani began teaming together in February, with the massive duo often wearing camouflage and skull masks. Despite their intimidating appearance, the team of titans lost the majority of the time.

In their first match together as a tandem, which took place on February 12, 2016 at a show in Tampa, The Authors of Pain lost to the team of Mojo Rawley and Zack Ryder (also known as The Hype Bros). In fact, the massive pair lost their first four matches before nabbing their first victory on April 22, 2016 (over a team of identical twin brothers, Gabriel Ealy and Uriel Ealy). In May, Dhinsa and Selmani lost three consecutive matches to NXT Tag Team Champions Chad Gable and Jason Jordan. 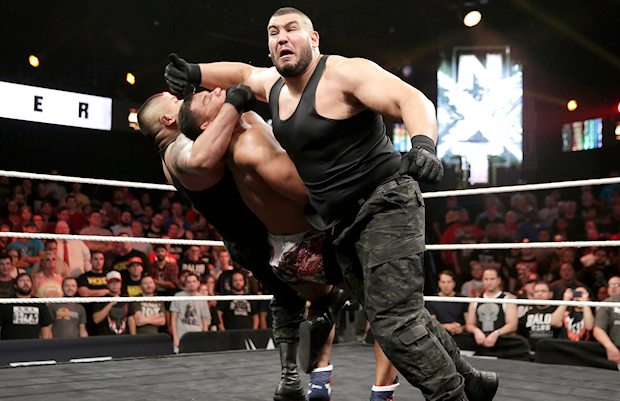 You can expect The Authors of Pain to follow a similar path to The Ascension — Viktor and Konnor — who dominated NXT’s tag team division with brute force in 2013 and 2014. Expect Sunny Dhinsa and Gzim Selmani to quickly squash competitors no-name competitors in preparation for a program with Chad Gable and Jason Jordan.

With Paul Ellering acting as their mouthpiece, he will give the devastating duo a huge boost. The legendary manager can do the talking while Dhinsa and Selmani get accustomed to the rigors of the squared circle. This will play to their strengths and mask the massive pair’s limited speaking skills.

With NXT running low on tag teams following the respective promotions of Enzo Amore, Big Cass and The Vaudevillains to WWE’s main roster, the road is clear for Dhinsa and Selmani to go straight to the top of the developmental branch in short order.