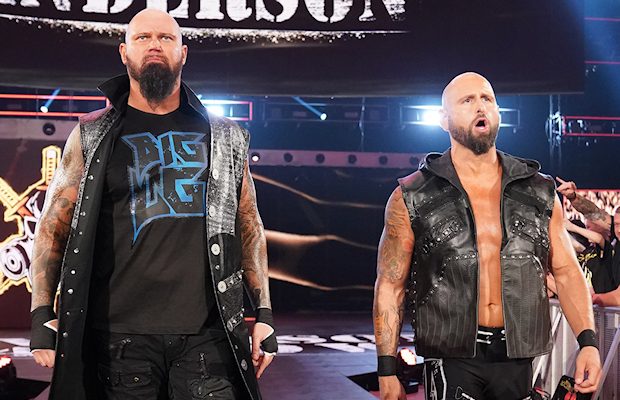 During the match, the announce team noted that both teams moved from SmackDown to Raw. While it was made clear in the Superstar Shake-up that Jey Uso and Jimmy Uso are now on Raw, there was no mention of Anderson and Gallows moving until last night.

According to Mike Johnson of PWInsider.com, the WWE creative team made the decision for Anderson and Gallows to join Raw during the first night of the Superstar Shake-up, but decided against revealing it until they appeared.

Johnson was also told there has been no change in their contractual status with WWE. They still plan on leaving the company when their respective contracts expire this fall.

Anderson and Gallows moved from Raw to SmackDown in last year’s Superstar Shake-up but accomplished little of note. Their top moment was beating The Usos on the May 22 episode of SmackDown LIVE to earn a shot at the SmackDown Tag Team Championship. They failed to win the titles from The Bludgeon Brothers the following month during the WWE Money in the Bank Kickoff show. Anderson and Gallows rarely appeared on television from that point forward, although they often wrestled at live events.

WWE has been racked with a number of brand switches since last week, mostly to balance out the rosters due to injuries and relationships. Raw last week had Cesaro and Samoa Joe move to Raw while Aleister Black, Andrade, Jinder Mahal, Samir Singh, Sunil Singh, and Zelina Vega were moved to SmackDown.

Here’s the updated list of roster additions for Raw and SmackDown LIVE since the Superstar Shake-up.