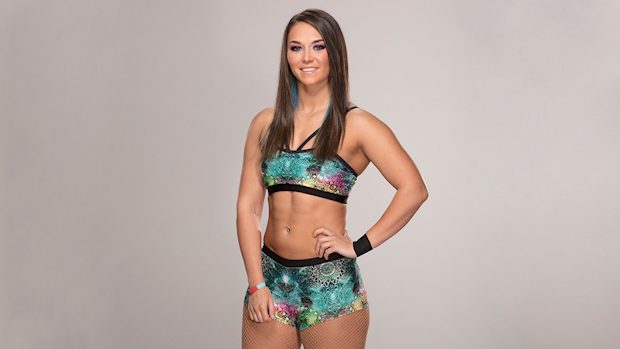 A year after a torn ACL kept her out of the inaugural tournament, Tegan Nox suffered an injury to her other leg at last Thursday’s Mae Young Classic tapings.

Nox was in the early stages of a match against Rhea Ripley when she went for a dive outside of the ring and injured her left leg upon impact. The match was stopped shortly thereafter and awarded to Ripley as medical officials came to Nox’s aid. The crowd was basically silent as Nox appeared visibly in pain and heard crying.

We have a photo and video of Nox after she suffered the injury.

In the video below, you can hear Nox crying.

Raw video after Tegan Knox vs Rhea Ripley ends after Tegan appeared to seriously injure her knee. Heartbreaking stuff here at Full sail, sending prayers and best wishes to Tegan. this is the risk these performers put on the line every day of their lives. #MaeYoungClassic pic.twitter.com/gdka3MgPnV

Paul “Triple H” Levesque spoke to the crowd about the situation and initially indicated that Nox had a broken leg, along with a broken heart over not being able to finish what she started. He said it would just be a bump in the road for her.

SPOILERS IN VIDEO: Triple H implies that Tegan broke her leg. Says it’s just a bump in the road for her. Came out to ensure crowd didn't die out and hyped up the last two SPOILER matches. #MaeYoungClassic pic.twitter.com/gszsJSOlhw

Levesque did an interview later that night with espnW, noting that Nox was taken to the hospital to determine the specifics of the injury.

“The doctor looked at it and it was so painful at the point that he couldn’t manipulate the disc to see if it was an ACL. So we have her headed over to the hospital now and check what it is.”

Levesque provided a minor update on how long her recovery process will take while speaking with the media during a conference call on Wednesday to promote NXT TakeOver: Brooklyn 4. He said it will be “awhile” before Nox is able to return to the ring, noting how she’s got a long road ahead.

While Levesque was initially under the belief that Nox broke her leg, based on a tweet from Nox on Friday, it seems that she sustained an injury to her knee.

The word going around is that she suffered a broken kneecap.

Despite the injury, Nox called the Mae Young Classic the best experience of her life. She said the support she’s received has been overwhelming and vowed to come back stronger than ever.

“This isn’t how I planned to finish the Mae Young Classic in any shape or form but the last 2 days have been the best experience of my life, despite the obvious! My match with Rhea was something I’ve wanted for a while because, damn that girl is talented (even if she is very moody). Freak accidents happen, it’s part of the job but to hear that she had a killer match with one of the best wrestlers in the world, Io Shirai made my heart swell with happiness.

“This is more mentally draining than it is physically but you can guarantee that this isn’t going to keep me down! I have the best friends and support system a girl could ever ask for!

“I worked so hard for over a year to be able to compete in this year’s MYC, so you know for a fact, I’m fighting back stronger than ever!

“Every message I’ve received tonight on twitter, Facebook, Instagram, text, etc has been absolutely overwhelming! The fact that my hospital room was full of people really warms my heart and honestly meant the absolute world to me! I said it before and I’ll say it again, everything happens for a reason, so no matter what the full extent of this injury is, I’ll be back and I’ll be Shinier than ever.”

The 23-year-old Welsh native, who was a standout on the British independent wrestling circuit under the name Nixon Newell, was offered a WWE developmental contract following a tryout in November 2016. After waiting a few months to secure a work visa for the United States, she reported to the WWE Performance Center in May 2017. She was scheduled to be featured in the inaugural Mae Young Classic, but then fate cruelly stepped in.

With a simple wrong turn of her body during a day of training at the WWE Performance Center in June 2017, she sustained an ACL tear in her right knee. In the blink of an eye, her chance to wrestle in the inaugural Mae Young Classic — or in any ring at all for the foreseeable future — was gone.

After months of rehabilitation, she returned to the ring in April and worked NXT live events until June (initially under her real name, Steffanie Newell, before changing her ring name to Tegan Nox in June).

Nox injured her right leg during an NXT live event in Derby, England and her appearance at Wednesday’s Mae Young Classic tapings was her first action since then.