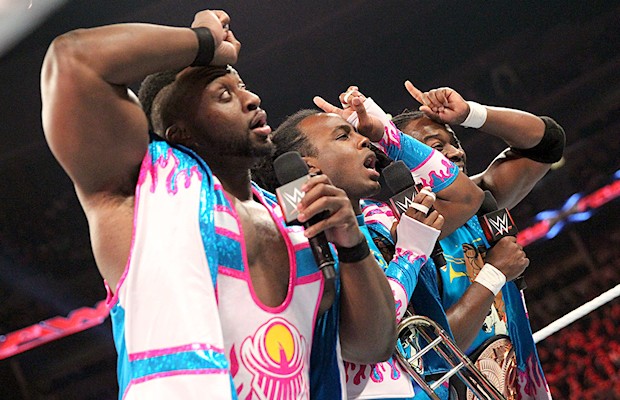 – Above is video from last night’s “Off The Top Rope” segment on ESPN SportsCenter with former WWE announcer Jonathan Coachman. Coach listed the top WWE Royal Rumble moments: Top Elimination – Coach getting tossed by Big Show in 2006, Top Performance of All-Time – Roman Reigns in 2014, Top Return – John Cena in 2008, Top Save – Shawn Michaels in 1995 and the Top Finish – Steve Austin in 1998.

WWE Tag Team Champions The New Day join Coachman in the video below. Coach calls them three of WWE’s most dynamic performers today and confirms they will be in the 30-man Royal Rumble main event on Sunday. Kofi Kingston talks about how The New Day is all about them being together and taking WWE over together. Xavier Woods brags about their track suits and other merchandise, available on WWE Shop. Coach asks if Kofi’s New England Patriots win the NFL’s AFC Championship on Sunday, will he be motivated for the Rumble. Kofi doesn’t want to talk about the Patriots right now and says he’d really like to win the Rumble. Coach asks Big E who he thinks the strongest person in WWE is. Big E talks about Mark Henry but says his time has passed, Big E is the man now. Coach brings up how he played the trombone in school and Woods does the ESPN alert with his own trombone. Woods says they are unicorns because they have brought magic back to WWE. Coach wraps the segment after some more shenanigans.