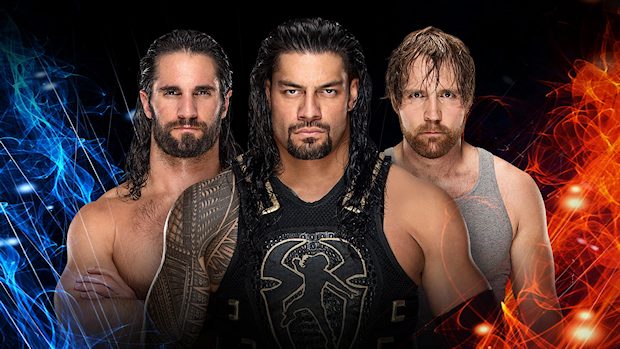 – After being thrown into the side of a police van on Raw, Seth Rollins appeared at last night’s WWE live event in Birmingham, Alabama, but did not wrestle. Rollins emerged with Dean Ambrose after Dolph Ziggler and Drew McIntyre attacked Roman Reigns during his match against Braun Strowman to cause a disqualification.

After getting the better of Ziggler and McIntyre, The Shield brought a table into the ring and attempted to triple powerbomb Ziggler through it. The table, however, didn’t break, leaving Ziggler to crumple to the canvas in pain.

McIntyre then crawled into the ring and The Shield slammed him through a different table.

– Ahead of WWE Hell in a Cell on September 16, Mick Foley returns to Raw this Monday to commemorate the 20th anniversary of his grueling and iconic Hell in a Cell Match against The Undertaker at King of the Ring 1998. Here is what WWE.com has to say about his appearance this Monday.

As Universal Champion Roman Reigns and Braun Strowman take their rivalry inside Hell in a Cell for the first time ever, WWE Hall of Famer Mick Foley — who infamously soared off the top of the diabolical structure two decades ago — returns to Raw to commemorate the 20th anniversary of that grueling and iconic Hell in a Cell Match against The Undertaker at King of the Ring 1998.

What advice will Mrs. Foley’s Baby Boy impart to the Superstars preparing to do battle inside the cell’s terrifying confines, and how will he celebrate one of the most brutal matches in the history of sports-entertainment?

Don’t miss any of the action on Monday Night Raw, live at 8/7 C on USA Network!