The Undertaker and Roman Reigns Share The Yard - Photos and Video Of The Deadman's Return At MSG - PWPIX.net 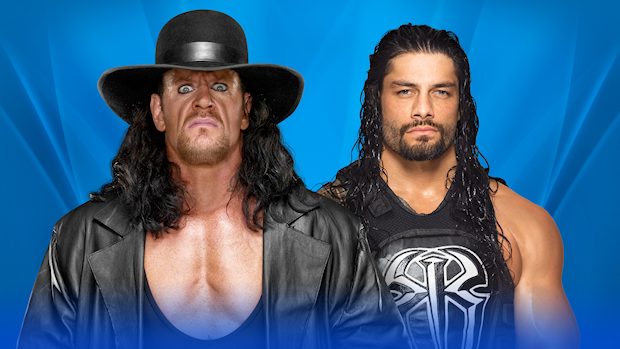 The Undertaker returned to action on Saturday night at a WWE live event at Madison Square Garden for a Six-Man Tag Team Match with Braun Strowman and his WrestleMania 33 nemesis, Roman Reigns, against Kevin Owens, Baron Corbin, and Elias.

The fans of New York City were very excited to see “The Deadman.”

None of the heels wanted to start the match, with Owens finally taking on Strowman. The heels kept tagging out until Strowman tagged in Reigns to huge boos. The tag to Undertaker was constantly teased throughout the match, with a huge pop coming when he entered the ring without being tagged when Owens knocked into him.

The Undertaker finally tagged in after Reigns hit a Superman Punch. He set up Owens and Elias for a double chokeslam but got interrupted by Corbin. After Strowman and Reigns took out Corbin and Elias, Undertaker hit the Tombstone on Owens for the pin.

The winners stood around for a while, with “The Monster Among Men” eventually shaking hands with Taker and leaving him to handle any lingering yard issues with “The Big Dog.” After a tense moment, the beef was squashed in a show of respect.

Roman rolled out and left Taker to finish the night for the folks who paid to see him one more time.

The Undertaker’s next scheduled match will be against Triple H as they battle each other for the final time at WWE Super Show-Down, streaming live on WWE Network on Oct. 6.