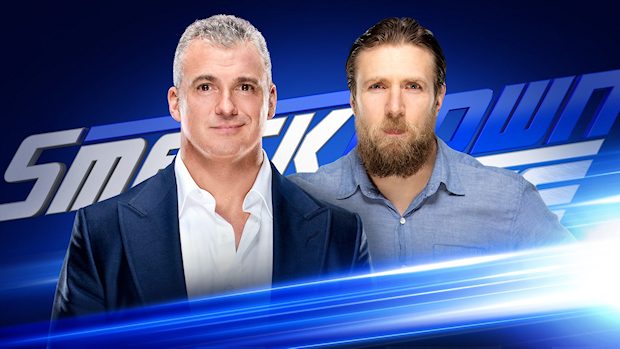 Three matches and Shane McMahon’s return to television have been announced for tonight’s go-home edition of SmackDown LIVE.

AJ Styles and Shinsuke Nakamura will be teaming up just days before their WWE Championship Match at WrestleMania 34. They’re facing Chad Gable and Shelton Benjamin, which comes after Nakamura defeated Benjamin in last week’s main event, saved Styles from Gable and Benjamin and played mind games with Styles by faking that he was going to hit him with the Kinshasa.

After she missed last Tuesday’s show due to not recovering from minor dental surgery in time, SmackDown Women’s Champion Charlotte Flair will be back on television tonight as she faces Natalya in a non-title match. Natalya got a win over Charlotte two weeks ago following a distraction from Carmella, and their rematch was supposed to happen last week before it was canceled when Charlotte was pulled from the show.

Rusev, who has been added to the United States Championship Match for WrestleMania, will take on Jinder Mahal tonight. On Sunday, those two, Randy Orton, and Bobby Roode will face off in a fatal four-way.

Shane’s first appearance since the angle where he was attacked by Kevin Owens and Sami Zayn last month is the most heavily promoted thing for tonight’s go-home show. Despite him dealing with acute diverticulitis and an umbilical hernia, WWE announced last Tuesday that Shane had been discharged from the hospital and confirmed Daniel Bryan and Shane vs. Owens and Zayn for WrestleMania. The stipulation is that Owens and Zayn will get their jobs back if they win. If they lose, they’ll remain fired in storyline.