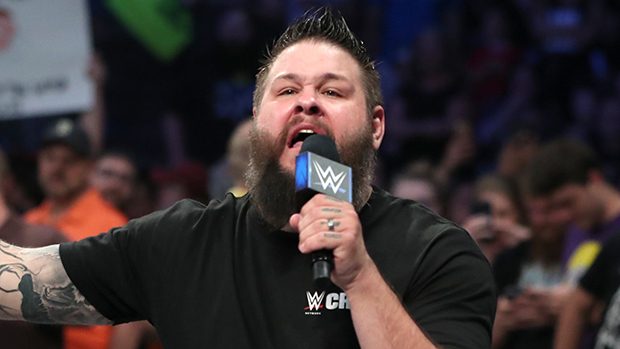 After Kevin Owens got into a jaw-dropping brawl with Dolph Ziggler in the parking lot earlier in the day – which resulted in Shane McMahon canceling a match between the two Superstars – KO stormed into the arena to kick off SmackDown LIVE ready to verbally unload on “The Best in the World.”

Owens pulled no punches on Shane, saying that the former SmackDown LIVE Commissioner was smothering all of WWE and that Shane’s presence was making him sick.

Shane repeatedly tried to cut out KO’s microphone before finally summoning security to obtain Owens and escort him out of the ring and, presumably, the building. However, Owens exited through the timekeeper’s area (the same way he entered) before security could grab him.

According to Paul Davis of WrestlingNews.co, the latest chapter in their rivalry is supposed to result in the gradual removal of Shane from weekly storylines.

“Believe it or not, the company realizes that there is too much Shane McMahon on television and they are paying more attention to what people are saying on social media about the product,” Davis wrote.

“The declining ratings have forced Vince McMahon to ask for more input on the product and he’s listening to the criticism more than ever. They have also done surveys to figure out what people do and don’t like about the shows.”

There was a lot of praise backstage for Owens’ “worked shoot” promo. The idea behind Owens’ face turn is that he’s speaking up for the fans, who are tired of Shane getting so much television time and taking it away from WWE Superstars. Some of the names Owens mentioned as Shane taking away TV time from (Apollo Crews, Buddy Murphy, Ali, Liv Morgan, Asuka, Kairi Sane and AOP were mentioned) are expected to appear soon on SmackDown LIVE (or more often).