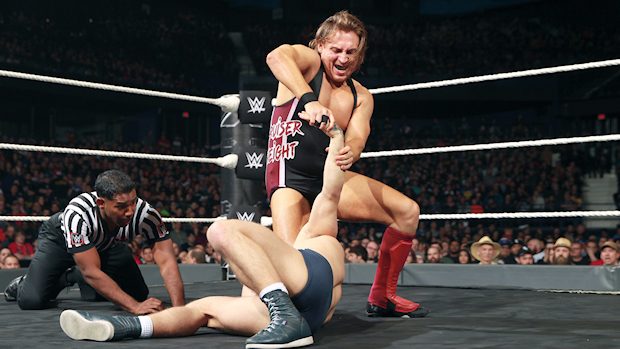 WWE has announced Johnny Gargano vs. WWE UK Champion Pete Dunne as the dark match for the WWE NXT “Takeover: WarGames” event on Saturday, November 18th from the Toyota Center in Houston during Survivor Series weekend.

Below is the full announcement on the match:

If you want to bear witness to WWE United Kingdom Champion Pete Dunne’s next colossal title defense live, there’s only one way to do so: By scoring a ticket to NXT’s debut at the Toyota Center in Houston on Saturday, Nov. 18.

Fresh off making his unforgettable debut on WWE Monday Night Raw, The BruiserWeight will put his WWE U.K. Title on the line against former NXT Tag Team Champion Johnny Gargano.

The match will not air as part of that night’s TakeOver: WarGames live special on WWE Network, meaning those lucky NXT fans in attendance in the Toyota Center will have an exclusive opportunity to watch the title bout unfold before their eyes.

One of the most popular Superstars in all NXT, Gargano has struggled to find his footing in the singles division since the painful breakup of #DIY last May. Could Johnny Wrestling change his fortunes in Houston by dethroning the devilish Dunne and becoming the first American to capture the U.K. Championship?

Find out for yourself by securing your seat today. Tickets for NXT in Houston are available now at NXTTickets.com!