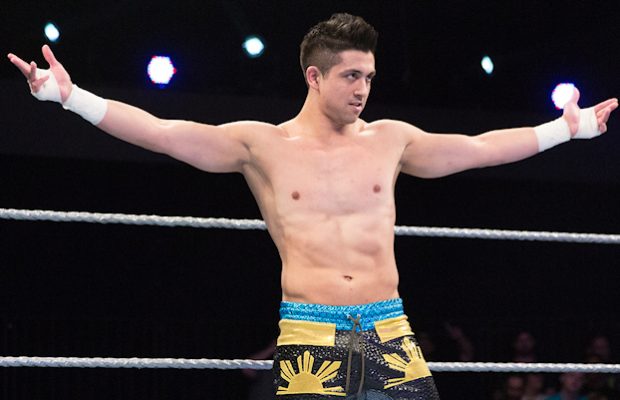 The first-ever WWE RAW Cruiserweight Champion TJ Perkins sat down to discuss the tournament and his journey to WWE with SportingNews.com. The full interview is at this link and below are just a few highlights:

Triple H has been such an influence for so many with NXT and with the Cruiserweight Classic as well as helping put it together. Did you have a moment with him?

Yeah. It’s been such a pleasant experience being here as a professional. I’ve had such great open and casual and professional interaction with all of the office and administration, all of my peers and everything. What I was stressing to a lot of the guys — and it’s weird because I’m young but I’m one of the senior members in the locker room already — I would stress to a lot of the guys that, I’ve been everywhere, I mean, everywhere, and you go places and you have a wonderful locker room and just a nightmare of an office. Or you have a wonderful office but a nightmare locker room. I’ve never been in a place, until now, where you have both. This is the first place I’ve even been where it’s across the board that everything’s so wonderful. Everybody is so supportive; it’s a family atmosphere. Everyone is so helpful and approachable. Triple H, everybody has been really wonderful.

I was able to speak with him the first week we were here for the first round. I spoke to him in the span of five days more times than I spoke with any other person of administration or boss I’ve ever had anywhere else in the span of five years. I spoke with him more within five days. That’s how engaged he is and how passionate he is about it. He encourages that in everybody and I think that’s a healthy atmosphere. That’s the way it should be. He’s a workaholic and I think he respects when other people are, too.

When did you find out that the finals match was not just going to decide the winner of the tournament but was the cruiserweight champion?

Pretty much when everybody saw the belt along with me in front of everybody. I didn’t get a chance to see it or understand that that was what the stakes are. You get a feeling that a lot of this stuff is going to be correlated and, definitely, winning the tournament is going to mean something, but until everyone has a chance to see it … I found out like everyone else (laughs).

When it comes to goals, what’s the goal now?

I think the goal is still the same but you have to take it to another level. I still want to inspire Filipino people. All we have is Manny (Pacquiao) and, as of right now, I’m no Manny but there’s an opportunity to get there and I want to keep pursuing that until I reach as many people as possible. And if this is to be the benchmark of a new generation for the cruiserweights, I want to be that. Same with everybody else that’s representing what they’re doing proudly. We had a Women’s Revolution and they have aspirations to main-event WrestleMania and I think that’s amazing and that’s great. I honestly think that’s something we’ll see. And the tag teams are going through a renaissance. I would love for it to be a perceivable idea that cruiserweights might main-event WrestleMania. Cruiserweights will represent in a bigger way than they had been in the past. For me, that’s my goal going forward is to represent this division and this culture, my people, in a bigger way than ever before and hopefully create new heroes for other people, people that will inspire me back.