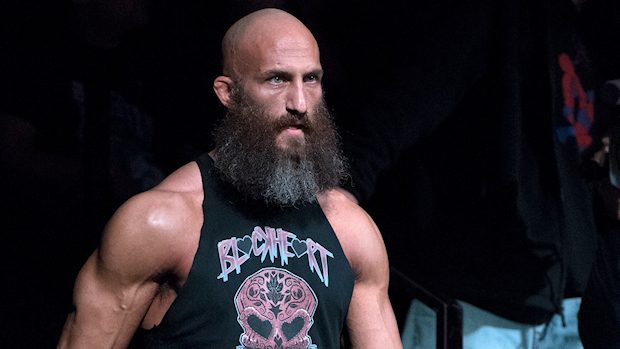 Tommaso Ciampa is the latest WWE Superstar bit by the injury bug.

The NXT Champion has been hampered with injuries the past two years, but a new one may halt his run on the main roster. According to a report from PWInsider, Ciampa is out of action due to a neck injury.

His injury ed in a rewrite of this past Monday’s episode of Raw. Ciampa and Johnny Gargano were slated to compete in a Fatal 4-Way Tag Team Match that would have also featured Aleister Black and Ricochet, as well as Curt Hawkins and Zack Ryder (the fourth team wasn’t confirmed). Raw Tag Team Champions Dash Wilder and Scott Dawson would have been at ringside for the match but once it was confirmed that Ciampa would not be cleared to wrestle, the match was changed to Black and Ricochet vs. Wilder and Dawson.

Ciampa has been dealing with the neck injury for the past four to five weeks, if not longer. Depending on if and when Ciampa is cleared to return, WWE will have to be creative regarding the NXT Championship and the 2019 Dusty Rhodes Tag Team Classic, which Ciampa is participating in. Depending on what the final determination is regarding his injury, WWE has multiple options to choose from.

As of Monday, Ciampa was not medically cleared to wrestle. He is not on the road this weekend.