Did WWE Really Plan On Doing Triple H vs. Batista At WrestleMania 35? 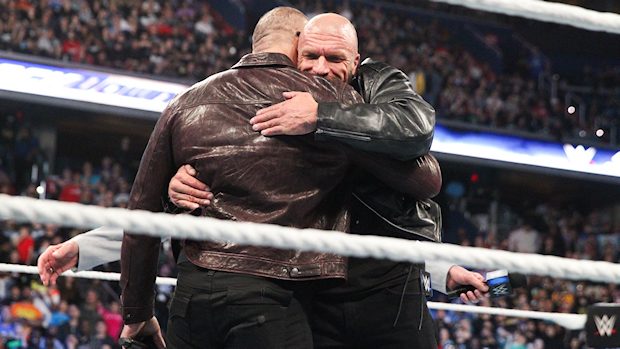 According to WWE.com, Triple H will now undergo intensive rehabilitation and his timetable for full recovery is currently undetermined.

“The Game” affirmed on social media that “all is well,” and that he is determined to begin the road to recovery.

Out of surgery, happy to report all is well. Thanks to excellent medical care of Dr. Dugas and his team and all the well wishes, messages, tweets, and texts I got over the weekend.
Road to recovery starts… NOW. #GameTime pic.twitter.com/cfEmocnDxi

The injury and surgery will likely prevent him from competing at WrestleMania 35 on April 7, 2019, since recovery from a torn pectoral muscle should keep him out of action for over five months.

NXT wrestler Tino Sabbatelli suffered a torn pectoral muscle during a match in late April and he was expected to be out of action for six to nine months. He underwent surgery six months ago and still hasn’t returned to action. So Triple H probably wouldn’t be able to wrestle again until at least May.

Before Triple H got injured, he seemed to be headed for a showdown with Batista at WrestleMania after their Evolution reunion at SmackDown 1000 ended on a tense note.

"There is nothing that this man hasn't done in this business…except beat me!" @DaveBautista just went there… #SD1000 pic.twitter.com/E7atsmfIL0

Triple H vs. Batista was indeed on the cards for WrestleMania 35, according to Dave Meltzer in the Wrestling Observer Newsletter.

The injury occurred when Triple H was tossed over the top rope early in the main event. It was clear immediately that something was wrong because you could see that he was not moving his right arm and he was talking to Michaels at ringside.

Later in the match, you could hear The Undertaker tell Kane that Hunter hurt his pec. Michael Cole said on commentary that it looked like he injured his rib but that did not look to be the case. Throughout the match, everything Hunter did looked awkward because he was not able to move his right arm.

Following the injury to Hunter, the match fell apart somewhat as HBK, The Undertaker and Kane had to work the match on the fly, an especially difficult proposition when Michaels has not wrestled for over eight years. He probably did not expect to be carrying his end of the match quite as much as he had to.

Triple H tried to stay active in a spot outside of the ring with Kane where they both ended up crashing unconvincingly into the barricades. It was clear at this point that Hunter had limited movement in his right arm and was barely able to move it. A spot was improvised to put him through the announce table so Dr. Chris Amman could check him out.

They didn't clear off the monitors. That's gotta hurt and that stuff is broken.#WWECrownJewel pic.twitter.com/TlcySjaQbO

Michaels also got hurt from a risky moonsault from the top turnbuckle to the outside, which left him bloody and temporarily dazed.

Hunter returned to the ring to close out the match (because with DX winning the match there was no way Michaels could realistically beat both of them on his own) and struggled through a few spots with Kane.

The match ended with a Michaels superkick to Kane followed by a gentle Pedigree from Triple H, who scored the pinfall victory.