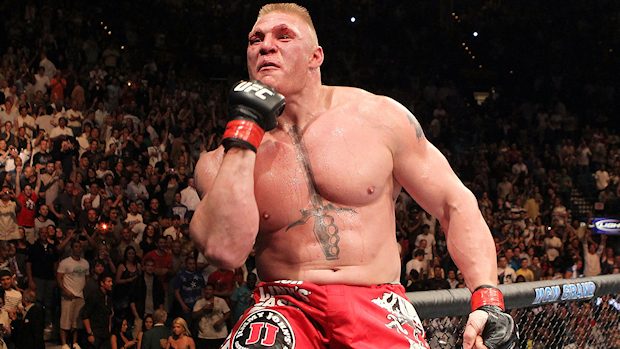 Brock Lesnar will not be making his return to the Octagon after all. The former UFC Heavyweight Champion has instead elected to retire, according to UFC President Dana White.

“He told me he’s done, he’s retired,” White told ESPN. “We’re going to move in another direction with Cormier.”

Lesnar (5-3) was projected to take on Daniel Cormier for the UFC Heavyweight Championship later this summer. However, that will no longer be happening.

Instead, Cormier will likely be involved in a rematch with Stipe Miocic, per White. The two met at UFC 226 in a first-round loss for Miocic.

Following Cormier’s win, Lesnar confronted him in the Octagon. The two exchanged words and a shove for a would-be buildup to a later match.

At the time, Lesnar said, “I’m coming for you mother-[expletive]!”

If Lesnar’s fighting career is indeed done, it was certainly a unique one. He fought nine times in a career that began with a Japanese promotion in 2007.

Over that stretch, Lesnar won the UFC Heavyweight Championship from Randy Couture in November 2008 and successfully defended it twice (Frank Mir, Shane Carwin) before dropping it to Cain Velasquez in October 2010. After battling diverticulitis, an affliction that was expected to end his career, he returned to the Octagon in December 2011, losing via TKO to Alistair Overeem.

Lesnar returned to the Octagon in July 2016 at UFC 200 and defeated Mark Hunt by unanimous decision. The decision was later overturned to a no contest due to Lesnar failing two drug tests. Lesnar was fined $250,000 and suspended from competition for one year by the Nevada State Athletic Commission (NSAC).

After losing the Universal Championship to Seth Rollins at WrestleMania 35, Lesnar is expected to return to the ring at WWE’s next Saudi Arabia event in June. WWE.com still has Lesnar listed as a member of the Raw roster.