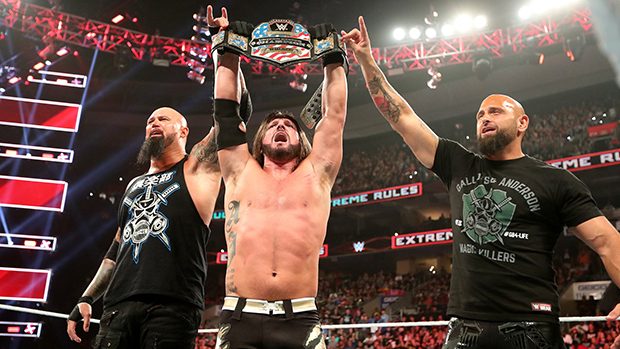 The match saw interference from Luke Gallows and Karl Anderson. They attacked Ricochet before the bell rang and later helped Styles win the United States Championship.

In the closing moments of the match, Gallows tripped Ricochet up on the turnbuckle (while the referee was distracted), thwarting what was looking to be an attempt at a 630. Styles capitalized, dropping Ricochet with a Super Styles Clash that was more than enough to earn him the three-count and the United States Championship.

With the win, Styles is now a three-time United States Champion. Ricochet won the title on June 23 at WWE Stomping Grounds by defeating Samoa Joe.

Did the tide just turn enough for @AJStylesOrg to capitalize and become #USChampion?! #ExtremeRules pic.twitter.com/lZm3AKaqsI

These two are pulling out ALL the stops for the sake of the #USTitle!#ExtremeRules @AJStylesOrg @KingRicochet pic.twitter.com/65iWRt1Vvr

.@KingRicochet and @AJStylesOrg know how to put on a show… but you can’t forget about that substance, either. #ExtremeRules pic.twitter.com/LNwUBG5G26

In this post-match interview with Cathy Kelley, Styles, Gallows and Anderson disparage Ricochet and Philadelphia after “The Phenomenal One”‘s win.