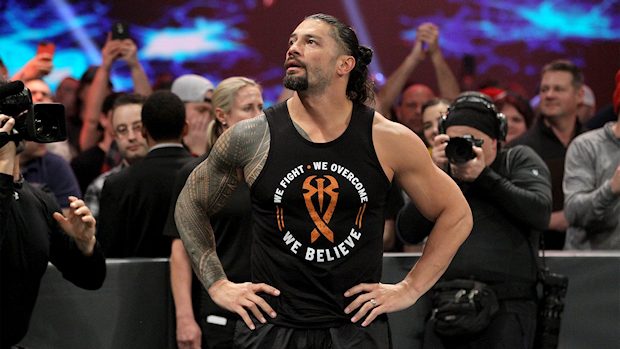 — After making his return to Raw on Monday, Roman Reigns is slated to appear on Raw regularly going forward.

Beginning with Raw this Monday in Philadelphia, Pennsylvania, WWE.com has Reigns advertised for every Monday Night Raw event through the May 6 show in Cincinnati, Ohio. He is also likely to be added to the May 13 Raw in London, England since he is advertised for other events on the European tour.

Aside from events in Brussels, Belgium; Marseille, France, and Paris, France, Reigns is not advertised for any house shows.

On Raw last Monday, Lynch attacked Rousey with a crutch before getting subdued and arrested. Rousey then called Vince McMahon down to the ring but was instead met by Stephanie McMahon, who barely got a word out before Rousey pleaded that the McMahons drop the charges against Lynch, reinstate her from suspension and place “The Man” back into the Raw Women’s Championship Match at WrestleMania 35. When Stephanie refused, Rousey laid the title and walked out of the ring.

Lynch took a shot at Rousey for abandoning the title, and “The Baddest Woman on the Planet” responded by calling her a dumbass.

— In this bonus scene from Total Bellas, Brie and Nikki Bella face off in a friendly sparring session.