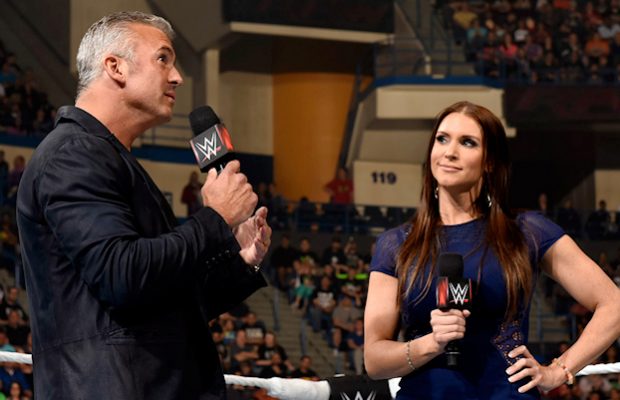 Regarding the WWE brand spit and SmackDown going live beginning Tuesday, July 19th, the belief is that one show will feature Shane McMahon in charge and one show will have Stephanie McMahon in charge, perhaps RAW. It’s also believed that while Vince McMahon and Triple H will continue running creative, current RAW and SmackDown head writers Ed Koskey and Ryan Ward will end up with more power since the creative writing teams will have more control and won’t have to constantly work together on ideas.

We noted yesterday that it was already being rumored that the WWE Women’s Title would be exclusive to one show. The Wrestling Observer Newsletter reports that the tentative plan is for the women’s division to be on both brands but the exclusive talk is there. The Women’s Champion would be the only person to appear on both brands, with the exception of whoever the singles champion is. It was also noted that they are still looking at doing two world titles again but that is not a lock and they could end up with just one top champion. The WWE Tag Team Titles are also still up in the air but everyone is still saying that the United States Title will be on one show while the Intercontinental Title will be on the other. There’s been talk of having two sets of tag champions or one set that would work both shows.

The WWE Draft is still rumored for July 11th in Detroit but not a lock. There are people in WWE campaigning for a hard split of the rosters while others want a soft spit with top stars making guest appearances on the other shows, allowing for more unique top matches on TV or pay-per-view events.

The Observer also reported internal belief is that John Cena will be the main star on SmackDown while Roman Reigns will be the top star for RAW. There’s still no word on what will happen with several top stars, including Brock Lesnar. It’s believed Lesnar will end up on RAW when he returns for SummerSlam hype but word is that even his brand is not a lock at this point.

As noted, everything is still up in the air and one guarantee is that many plans will change over the next month or so. WWE is officially saying that all the big questions will be answered in the next few weeks.